Black Activists See Frat House “TRUMP” Wall – What They Do Next? IS WRONG… Watch!

Donald Trump may be the worst thing to hit politics in years, but people are still allowed to show support for him. It’s a message that this group of activists really needs to learn. 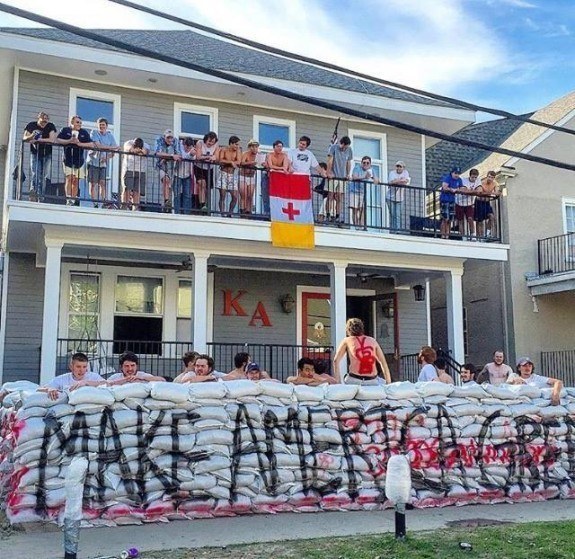 Students at Tulane University in New Orleans decided they would show their support for GOP presidential candidate Donald Trump by building their own wall of sandbags. They constructed the wall just outside the Kappa Alpha fraternity house and spray painted Trump’s slogan “Make America Great Again” across the front of the wall.

It didn’t take long for football players from the university’s team to make their way to the frat house and begin to tear the wall apart, even as those living in the house asked them to stop touching their property.

This is a prime example of how one group of people believes they are entitled to live by a different set of rules than the rest of society.

If a group of black students had built a wall or some other structure to show their support for Malcolm X and a group of white football players began to tear it down, they and the media would have immediately cried racism. However, because the wall had something to do with Trump, it’s apparently OK to destroy.

Conservatives abhor Hillary Clinton, but that doesn’t mean that we’re allowed to go tearing down her yard signs. Freedom of speech is for everyone, not just people we agree with.