In the aftermath[1] of the domestic terrorism committed in Charlottesville, Virginia by a deranged white supremacist, the media and left have gone out of their way to blame President Trump. He had absolutely nothing to do with it, but he’s become the target. Those that are responsible are the KKK, the neo-Nazis and the white Nationalists. But while we are assigning blame, don’t forget the radicals on the left: the communists, Black Lives Matter and Antifa were all there getting their violence on. It was just that the white nationalists beat them to the punch this time. Does no one remember the Dallas cops who were gunned down in the streets? Memory is selective here.

Rev. Derek McCoy, who is the executive vice president for the Center of Urban Renewal and Education, is one voice saying it is absolutely wrong to blame President Trump here. I agree… they have totally missed the point and it is the wrong target to attack. The fringe radicals on both sides are doing this and if you want brutal honesty from me, I believe communists are behind the whole thing, egging on chaos and violence for their political agenda. This is nothing new, it’s been done for over and over again throughout history. Trump is no more responsible for the racism, bigotry and hate on the right than he is the racism, bigotry and hate on the left. He is merely another target of the communists and radicals because he stands in the way of what they want… to burn it all down. 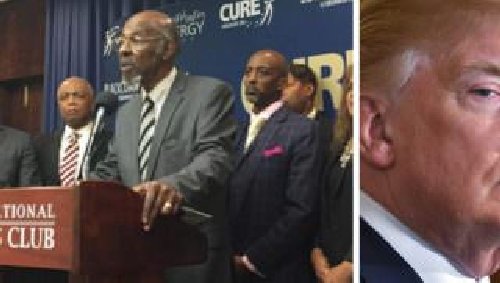 The deluge of liberal invective connecting President Donald Trump and his administration with the death of a woman protesting a white supremacist rally in Charlottesville, Virginia, last weekend has it “absolutely wrong,” a black minister said Monday.

Rev. Derek McCoy, executive vice president for the Center of Urban Renewal and Education, was among clergy who said claims by liberals and mainstream media that Trump has fostered a spirit of racism miss the point entirely.

“One thing you need to understand: You are saying that the president is the instigator, and I think that is absolutely wrong[4]. No, it is not disingenuous,” said McCoy.

“The president made his comments and we are not standing up here to say that we are best friends with everything the president does, but he is in an office that we all respect … If we are looking about how we can move our country forward, we are trying to make sure that we do that collectively together.”

President Trump is not a racist and he doesn’t tear down statues and stomp on them. He doesn’t carry signs with communist logos of fascist daydreams on them. He’s opposed to both factions and he is desperately trying to hold a fractured nation together. The media is busy trying to tear Trump down and destroy the country. Leftists are cuddling with the commies and are having fevered dreams of revolution. Fascists are vowing to hold more rallies and fight the communists. Some think we should just arm both sides and let them have at it once for all. Down that road lies death and madness.

The clergy have it right here… don’t let the media distract us from what is really going on by blaming President Trump. Activist Star Parker, who founded CURE, said Trump’s initial statement condemning violence on both ends of the political spectrum was correct. “I would like for us to finally address the ‘alt-right’ and the ‘alt-left’ — the instigators that continue this discussion that racism is so inherent in our society that they are going to look for it endlessly to then spark the tensions of the ‘alt-right.’ The ‘alt-right’ was sent underground. They have been emboldened because of the ‘alt-left,’” she said. And Star is right. We need to fight the radicals on both sides… you don’t go after one and ignore the other.

Parker went on: “We are either going to be biblical and free or we are going to be secular in status. That is the cultural war. There is no need in us denying that we are … in one,” Parker said. “It has been intensifying over time and now it is coming to a culmination that can drag each and every one of us into another civil war. We don’t want that, and the clergy will stand up and support the president in his effort to make sure that we have this discussion and we have it civilly.” I will go even further… we will either purge ourselves of the communists and radicals in our midst or we will fall. It’s just that simple.

I agree with the clergy here… America has lost her way and to hearken to the siren call of the media is to embrace the death of freedom in this country. Middle America, black and white clergy and those who embrace the Constitution all feel this way. And we are the majority… we need to start acting like it and support the President on this issue.