Bob Woodward: ‘This Is Not Yet Watergate’ [VIDEO] 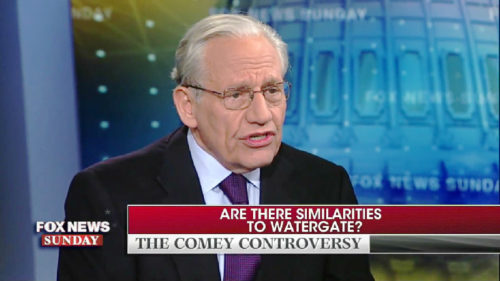 Watergate. It was the watershed political moment[2] of its time. It caused a President to resign in disgrace. He had committed a crime, a crime which had incontrovertible evidence to prove it. A crime that by today’s standards would not even be considered a crime. So many people today think they know what Watergate was. They casually wonder aloud if Trump’s firing of James Comey is “like Watergate.”

And of course the answer is no, it is nothing at all like Watergate because Watergate centered around a criminal act. The firing of Comey is not a criminal act. The Director of the FBI serves at the pleasure of the President. And any President can fire that Director at will, with no explanation to the media or the American people needed or required. As the Chief Executive, it is the President’s prerogative to hire or fire many of those under his direct authority. And in fact, Trump certainly isn’t the first to fire an FBI Director. As well, any investigation in process when Comey was fired is still in process today. So much for the Left’s crazed accusation that Trump fired him to “stop the investigation” into his alleged relationship with Russia.

But the American Left, in its typical unhinged fashion, is screeching about Watergate. And most of them have no idea what it is. But there is someone who does know what it is. There were two journalists from The Washington Post who reported the Watergate scandal back in 1972. It literally made their careers. Those two reporters were Carl Bernstein and Bob Woodward. And it is exactly this Bob Woodward who was on Fox talking about the Comey firing. His comment? It is “not yet a Watergate.” But listening to the rest of the media, you’d think that we have Watergate 2.0 on our hands. In other words, these folks are jumping the gun. In fact, when it comes to the firing of Comey, no crime has either been alleged or proven. So no, it’s NOT Watergate. It’s a President properly exercising his authority.

So let’s all calm down folks. Nothing to see here. Video of Woodward’s statements below.