Kellyanne Conway is simply deadly[1] when you go after Donald Trump. Her response to Meryl Streep trashing the President-elect at the Golden Globes was epic. At issue here is the charge that Trump made fun of a reporter during a speech in 2015. Trump denies that is what he was doing… he claims he was depicting the guy as groveling. I have no idea which it was, but I do know it is water under the bridge. I don’t see Streep bringing up Clinton’s criminal activities and putting the entire nation at risk, but she’s all over Trump over one action. Conway was having none of it.

Kellyanne bluntly stated on Fox News that she’d like to know where Streep’s passion is for the disabled white boy in Chicago who was brutally tortured by four young black thugs. Nowhere is where. Because it doesn’t serve a political narrative. But trashing our newly elected President does. This is a woman whose career is pretty much finished at 67 and who is a bitter vindictive diva looking to support her friends Hillary Clinton and Barack Obama. If Streep really cares about the disabled, let’s hear her address the Chicago incident, otherwise, she should just shut it. 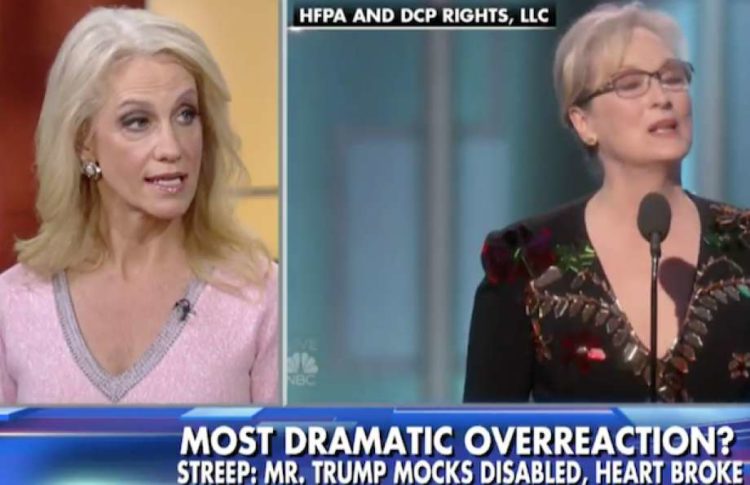 Whatever you think about Trump’s comments, it was his former campaign manager Kellyanne Conway, who really put things in perspective.

Appearing on Fox and Friends Monday morning, Conway said, ‘My initial reaction is I’m glad Meryl Streep has such a passion for the disabled because I didn’t hear her weigh in and I didn’t hear her use her platform last night to give a shout-out to the mentally challenged boy who last week was tortured live on Facebook for half an hour.”

‘So I’d like to hear from her today, if she wants to come and continue her platform on behalf of the disabled,’ said Conway to close things out, adding that Trump has debunked the claim that he was mocking the reporter countless times in the past.

I love how these liberal Marxist actors get all dressed up for one another and give each other awards. Personally, I don’t watch these award ceremonies. They are meaningless to most Americans, just as Meryl Streep is. Instead of gracefully accepting an award which used to be the custom, these actors feel it is their cue to do some political grandstanding. No, it really, really isn’t.

Trump was furious over the bashing by Streep and didn’t hold back:

‘For the 100th time, I never “mocked” a disabled reporter (would never do that) but simply showed him “groveling” when he totally changed a 16 year old story that he had written in order to make me look bad. Just more very dishonest media!’ wrote Trump.

The president-elect also said in a statement earlier on Monday: ‘I was never mocking anyone. I was calling into question a reporter who had gotten nervous because he had changed his story.

‘People keep saying I intended to mock the reporter’s disability, as if Meryl Streep and others could read my mind, and I did no such thing.’

This is just more anger and pettiness from the left. You can expect this to keep up for the next four to eight years. But Americans won’t be listening to them. These worthless entertainers don’t pay our bills, feed our families or give us hope for the future. They are entertainers living in their own little world and many of them pretty much suck at that too. They are over paid, over rated narcissists. They don’t represent the common man, but Trump does.