President Trump’s Middle Eastern tour[1] was a huge success. His visit to Europe, not so much. As Trump met with the G7 and NATO, he demanded that countries pay their fair share for military defense. They certainly should and Trump is right on that point. Where he went off the rails was not committing to NATO. Full disclosure, I am a supporter of NATO… they are the last line of defense for protection from military incursions from countries such as Russia. They do fight terrorism, just not as aggressively as I’d like. Trump should have recommitted us to NATO; he didn’t and that is going to be a very bad thing in the end I fear. But what is even worse, is what Angela Merkel just did.

Merkel (who I consider to be a Russian plant) met with Barack Obama before meeting with President Trump. She then proceeded to tell Europe that they could no longer depend on the United States. She did however, immediately invite Russia into the mix and so did France. That could very well herald the death of NATO, which means the Baltic States will fall to Vladimir Putin. Goodbye Ukraine. It opens the door for Russia to move into the gap and become an even larger menace than they already are. 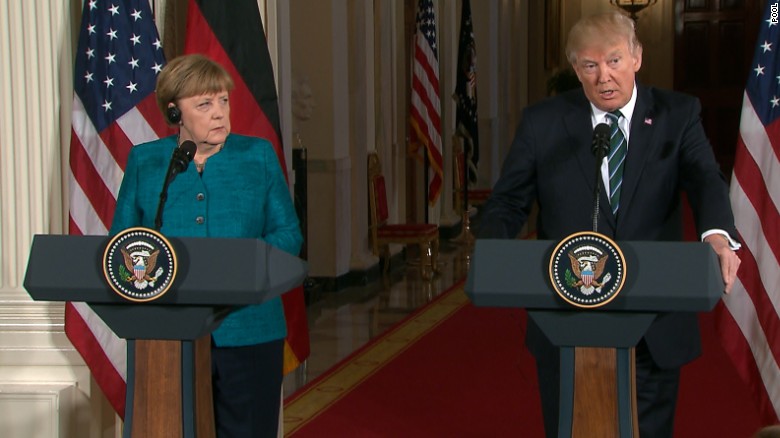 Donald Trump lashed out at German Chancellor Angela Merkel shortly after she said Europeans can no longer rely on other countries and should “take our fate into our own hands.”

On Twitter Monday, the president said the relationship between the U.S. is Germany is “very bad” and “will change.”

“We have a MASSIVE trade deficit with Germany, plus they pay FAR LESS than they should on NATO & military. Very bad for U.S. This will change.”

After Trump and Merkel met twice twice during his foreign trip, both at the NATO summit in Brussels and the G-7 gathering in Sicily, she said “Europeans truly have to take our fate into our own hands.”

“The times in which we could rely fully on others — they are somewhat over,” Merkel said at a rally Sunday. “This is what I experienced in the last few days.”

“I can only say that we Europeans must really take our fate into our own hands — of course in friendship with the United States of America, in friendship with Great Britain and as good neighbors wherever that is possible also with other countries, even with Russia.”

I do not blame the President for lashing out at Merkel. She just betrayed us as an ally and turned to a stalwart enemy – lowering the hammer on her is what she deserved. I expected for Merkel to do this eventually. She has been laying the groundwork for some time by opening Germany’s borders and letting hordes of Islamic Jihadists in. The move was meant to reinvent the demographic in Europe, so elitists and dictators could grab more power, more wealth and more control of the people. Putin will ride in on his white steed and bring a brutal regime with him.

The ‘fate’ that Merkel refers to[3] has already been handed to the Russians and the communists, just as they always planned to do in the end. I’m not sure how President Trump plans to change this ‘bad’ relationship with Germany, France, the EU and NATO, but right now it looks as if there isn’t much of a relationship to change. As war clouds gather, Vladimir Putin is smiling ear to ear… his work here has been wildly successful. Merkel and Macron immediately contacted Russia before Trump even arrived back home. What does that tell you?

We have a MASSIVE trade deficit with Germany, plus they pay FAR LESS than they should on NATO & military. Very bad for U.S. This will change