Yet another major Executive Order[1] that actually gets something done… I am impressed. President Trump signed the order today to drastically reduce regulations in the government. For every new one, two must be repealed. It is thought that this move could reduce overall regulations by as much as 70 to 75%. This will be great for business and economic growth. ‘BIGLY’ comes to mind.

This is another campaign promise kept by President Trump and DC must be swooning from all the action taking place in the White House these days. Mick Mulvaney of South Carolina will lead the Office of Management and Budget (OMB) and he will be very, very busy. Tremendous power and responsibility has been laid upon Mulvaney. From what I hear, he can handle it. He was a great choice. 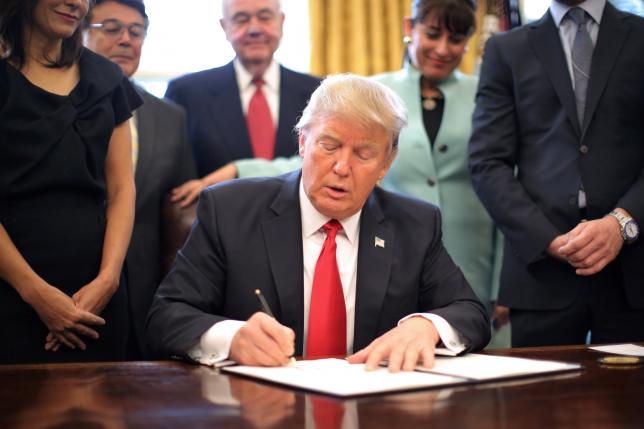 President Donald Trump signed an order on Monday that will seek to dramatically pare back federal regulations by requiring agencies to cut two existing regulations for every new rule introduced.

“This will be the biggest such act that our country has ever seen. There will be regulation, there will be control, but it will be normalized control,” Trump said as he signed the order in the Oval Office, surrounded by a group of small business owners.

Trump’s latest executive action will prepare a process for the White House to set an annual cap on the cost of new regulations, a senior official told reporters ahead of the signing.

For the rest of fiscal 2017, the cap will require that the cost of any additional regulations be completely offset by undoing existing rules, the official said on customary condition of anonymity.

Trump, a businessman turned politician, campaigned on a promise to reduce federal regulations that he said burdened American businesses.

Major regulations are typically reviewed by the White House’s Office of Management and Budget (OMB) before they are issued. That review will continue under this new measure, but agencies will also have to identify what two regulations will be repealed to offset the costs of any new rule.

Certain categories of regulations will be exempt from this new policy, including those dealing with the military and national security. The OMB director will also have the ability to waive this policy in certain instances. In other words, he can use common sense depending on the situation.

After signing the order, Trump met with some of America’s small business leaders at the White House. The new act also slashes the regulatory budget to $0 for fiscal year 2017. While speaking to the media, Trump reiterated his administration’s goal to both lower taxes and simplify the tax code for America’s “28 million” small businesses. He cited Dodd-Frank as an obstacle for starting up and expanding businesses, pledging that his administration would “do a number” on the post-recession regulation aimed at ending “too big to fail” institutions.

After the meeting[3], small business leaders in attendance praised Trump’s willingness to give Main Street “a seat at the table,” calling the outcome “fantastic.” “Thank you for doing this because small business has been buried in a tidal wave of red tape. To break that will really change the world for us, thank you,” one of the business owners told Trump in front of reporters. Sounds to me like we finally have a business-friendly President in the White House. How refreshing.