Carter Page is in hot water[1] and it’s about to boil it would seem. This is a man I wrote on and warned about long ago. Trump’s team is claiming he was never connected to them, but that just isn’t true. He was an adviser to the Trump campaign early on. To be fair, Trump cut the guy off early on as well. And it would seem with good reason. It turns out the FBI did have a FISA warrant against Page. Why? Because he was approached in 2013 by the Russians to spy for them. He claims he turned them down… but he did meet with them. Please note that Page has not been charged with any crime, which indicates to me that they have nothing on him or he would have already been behind bars.

The FBI still strongly suspects that Page was acting as an agent for the Russians. I do too, just for the record. Page is heavy into investments in Russia… especially oil and gas. If I had to guess, I would bet he approached an intermediary for Trump’s team to ‘help’ them out. I also seriously suspect that Paul Manafort, who took millions every year from the Russians, was also compromised. This doesn’t make President Trump guilty of collusion with the Russians, but it does show his camp was vulnerable to penetration by the Russkies. I think it is pretty evident that Trump is not in bed with the Russians… but the Russians were definitely trying to crawl between the sheets with him.

The revelation[3] confirms for the first time that a federal surveillance warrant, known as a FISA warrant, was issued for a member of the Trump campaign as part of a federal investigation of potential ties between the Republican’s associates and the Russian government.

In the application for the warrant, federal officials laid out what they said was evidence that there was probable cause showing that Page was acting as an agent of the Russian government, officials told The Post.

That evidence included contacts in 2013 with Russian spies who tried to recruit Page in New York City. The details of that recruitment attempt were laid out in a sealed FBI complaint filed in Jan. 2015. BuzzFeed News published the complaint earlier this month. Page denied that he was successfully recruited or that he shared any sensitive information with the agents.

I have written for years that you cannot trust the Russians. Just because we moronically cut back on our spies, it doesn’t mean they did. In fact, they have stepped up their intelligence. Individuals like Carter Page who have financial ties to Russia are prime candidates to be flipped to become spies for the Kremlin. Federal officials cited other contacts between Page and Russian operatives in the FISA application. Those contacts have not been made public… yet.

Page is an energy consultant who runs the Manhattan-based firm Global Energy Capital and he was brought on to the campaign in March as a foreign policy adviser. He served in a low-level role and is said to have never met Trump. The Democrats are trying to insinuate this means that Trump was doing the bidding of the Russians. I don’t believe so and there is no evidence of that. Page, whose offices are in a building adjacent to Trump Tower, drew national attention in July after he traveled to Moscow to give a speech at a university commencement ceremony. While in Moscow, Page met Arkady Dvorkovich, Russia’s deputy prime minister. Page officially left the Trump campaign in September.

Page is the only one who was actually surveilled it would seem.[4] There’s nothing on Paul Manafort, Roger Stone or Michael Flynn. All of these men have had iffy contacts with the Russians at one point or another. All of them have been paid by the Russians as well. That doesn’t mean much… all have been under scrutiny and more will come out on them. Page is denying all wrong doing and says he will be proven innocent of connections to Putin. He cites false information on him in that cooked up dossier on Trump. We’ll see. The truth will eventually come out and this doesn’t make the Trump administration look good. But there has been no charges of wrong doing so far. Innocent until proven guilty… the media should remember that. And guilt by association won’t hold up here. 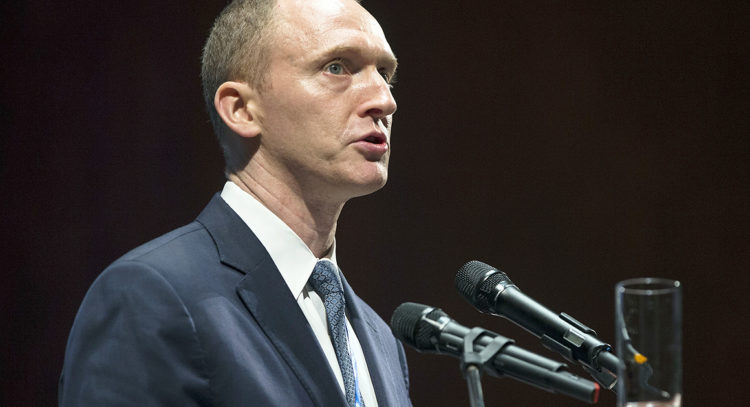