One of the worst things[1] I saw last summer were the violent attacks on Trump supporters in San Jose. Police were nowhere to be found and did not do their duty there that day. Victims of the violence have now filed a lawsuit against the city. The city tried to get the case dismissed, but the judge has decided to allow the suit to continue in a win for the Trump supporters. Hopefully, they will win that suit as they should.

And it wasn’t just that the police weren’t there… they were. They stood there and let the Trump supporters be assaulted. We were just lucky no one was killed. People were terrorized… they were chased, mocked, pummeled and had eggs and other things thrown at them. Whatever happened to equal protection under the law? How about the constitutional right to free speech? These people were not only assaulted by thugs, they were deprived of their rights as Americans. 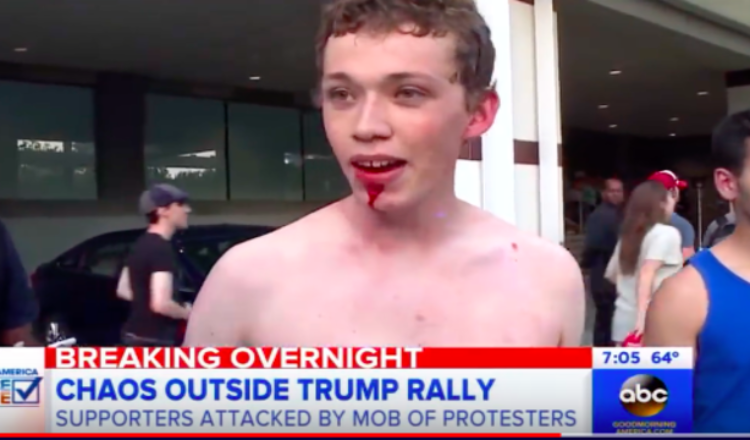 According to CBS Local[3]:

“We’ve seen video appearing on international local and national media that shows the police standing by as people were getting gruesomely attacked,” said Charles Moran who is with the California Log Cabin Republicans.

Harmeet Dhillon is the attorney representing the assaulted plaintiffs. She was also present at the rally[4].

“Citizens ranging from their teens to their 70s were assaulted, abused, chased, hunted, and terrorized in a situation for which the city is responsible, and must now answer,” Dhillon told LifeZette. “This lawsuit seeks to vindicate the principle that every American — regardless of his or her political beliefs — is entitled to equal protection of the laws, and to the rights of free speech and free assembly, particularly in the support of their candidate of choice.”

Juan Hernandez was one of the victims.

“It felt like we were the lamb being led to the slaughterhouse,” said Juan Hernandez, a Trump supporter who suffered a broken nose, speaking to The Mercury News. “I went down into a fetal position and the punches were coming in at every angle. The officers weren’t doing anything as the attacks were happening. This should not happen anywhere — no matter who you support, Democrat or Republican — this should not happen.”

Four arrests were made… it should have been many more. The police claimed they did not wade into the protests because they feared making things worse. It’s their damned job to get in there and protect people and they know it. I blame their superiors who surely ordered this. All of them can explain their lack of action in court now.

A federal judge[5] has now ruled that Trump supporters who were ambushed by a mob in San Jose won’t be ignored by the city. Despite the city trying to weasel out of all this. According to Twitchy, KCBS reported this week that federal judge Lucy Koh gave the green light to a lawsuit against the city by Trump supporters who allege police did nothing to protect them outside of a rally where an anti-Trump mob had gathered. The mayor there tried to claim the lawsuit was baseless. Too bad for him a fair judge got a hold of it. 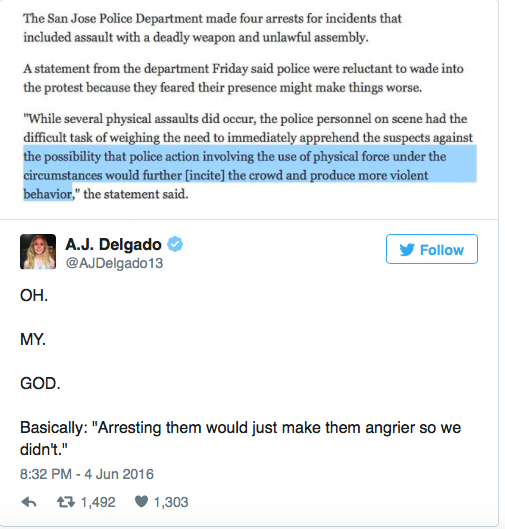