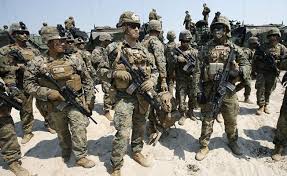 The situation in the Middle East is tenuous to say the least. In fact, in Syria the battle wages at its worst. Both Americans and Syrians are at risk of terror from ISIS. The Syrians are being persecuted horrifically within their nation. America is doing something pretty dramatic to step up the game in Syria. And it has everything to do with our Marines.

According to Young Conservatives[2]:

In testimony before the Senate Armed Services Committee, Votel confirmed that elements of the 11th Marine Expeditionary Unit moved from U.S. Navy ships in the Mediterranean into an undisclosed location in Syria as local Kurdish and Arab fighters prepare to mount an assault on Raqqa, the Islamic States’ self-proclaimed capital in Syria.

The Marines will not be engaging in frontline fighting with ISIS, but will be acting in a support capacity for indigenous forces.

But they brought some powerful artillery with them. They deployed with M777 Howitzers, which can lob shells at targets up to 20 miles away with amazing accuracy.

The goal is to help develop and prevent further infestation and growth of ISIS forces in Syria by helping develop and strengthen indigenous areas. The effort has proved successful in the past in former Middle Eastern efforts in other countries. By helping develop relationships and working to help the people, the hope is that Syria will one day be a safe nation again.