With the people of this nation at odds with one another over….everything, the good news is like a fresh new morning that opens up the day with hope for the future. 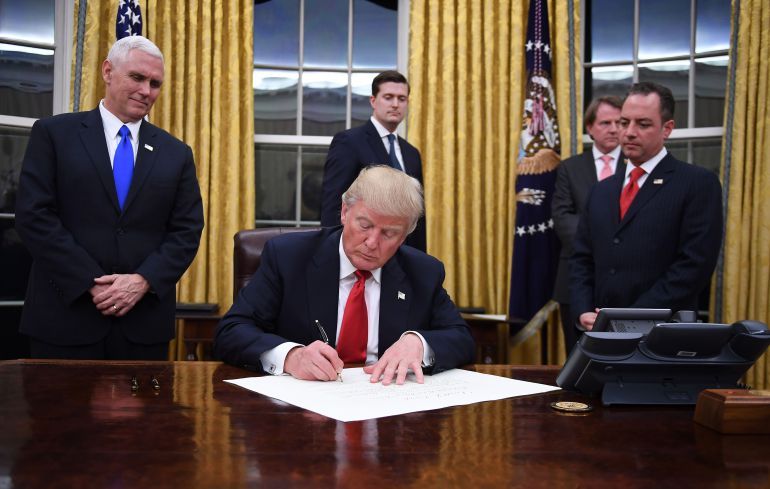 Well, we have some good news that we hope does just that for you. President Trump has just closed the deal on another campaign promise with the signing of this executive order[2].

Fellow Americans, we have watched as the education system of this country has gone to crap. Generations have been deprived of a real education that offers them the skill sets that would make them successful and teach them critical thinking skills that are so important to leading a life of self-reliance.

Well, now action has been taken thanks to Trump keeping his promise and as a China state-run paper reported: “Trump is…to be regarded as a man who honors his promises.”

Of course, there are many examples to back up that claim. One being…well, did you see his tax plan? On paper it looks….stellar. Then there are his promises he has made on this new executive order on education.

You are going to love this.

President Trump, our president has just signed an executive order, and in it he is calling on the Education Department to investigate whether the federal government has overstepped state and local control of our education.

“We know that local communities do it best and know it best,” Trump said during a signing ceremony on Wednesday, according to the White House press pool. “Previous administrations have wrongly forced states and schools to comply with federal whims and dictates for what our kids are taught. The time has come to empower teachers and parents to make the decisions that help their students achieve success.”

So now because of this order by Trump, our Education Secretary has 300 days to examine all the information and see if any regulations or guidance are an overreach of the fed’s rightful authority.

Of course, conservative groups are shouting for joy, the ones that are in favor of limited government at least…they are praising the executive order.

“Conducting such a review is part and parcel of ensuring that education innovation and opportunity are able to take root throughout our various education sectors,” said Jeanne Allen, founder and CEO of the Center for Education Reform. “The process will also allow the public to learn just how much oversight occurs as a result of bureaucracy, not law, and pave the way for all schools to focus on outcomes, not compliance.”

A lot of people believe the Department of Education should just be eliminated. Get rid of it. If we don’t eliminate it completely, we certainly need to cut its power and reach. Education has to be run locally. Common Core, No Child Left Behind, and Race to the Top are all programs that take decisions away from parents and local school boards. These programs allow the progressives in the Department of Education to indoctrinate, not educate, our kids. What they are doing does not fit the American model of governance.

I am totally against these programs and the Department of Education. It’s a disaster. We cannot continue to fail our children–the very future of this nation.

Eliminating the Department of Education has been a major campaign promise for Republicans who have been so tired of watching the level of education in this country going down the drain.

The federal government has no constitutional authority to be involved in school curricula or to control jobs in the workplace. That is why we will abolish the Department of Education, end federal meddling in our schools, and promote family choice at all levels of learning.

However, the Department of Education has continued to grow in both size and power since its inception, much to the criticism of many Conservatives.

The national government has become meddlesome, intrusive and bullying. It now impedes more than it fosters. Much of what it mandates or encourages is misguided. It keeps people from doing what they know is right for their children, communities and states. It substitutes the rules of distant bureaucrats for the on-site knowledge of parents and teachers. And, particularly in the last several years, it has begun to lift from our communities the sense that they are responsible for the renewal and reform of American education and to suggest, instead, that Washington knows best and is taking charge.

Now it is true that this executive order may not be the poison needed for eradication of weeds that have grown within our Department of Education, but there is going to be a lot of weeding in its near future….and that my friends, is a start.

In John Hawkins’ New book ‘101 Things All Young Adults Should Know’, he teaches in chapter 16 of the book: “Be nice until it’s time to not be nice.” Right now…we are talking about our children and their education. Their education that is going to be one of the directing arrows of where their life will go and how they will influence our country with their existence.

We’ve been nice long enough, giving this whole Commoncore garbage a chance…it’s time to not be nice about it.

Think of the children…