The British Prime Minister had some explaining to do after she was seen exiting the White House while holding President Donald Trump’s hand.

When asked what the viral picture was about, she had to admit that she saw Trump as a “gentleman.” 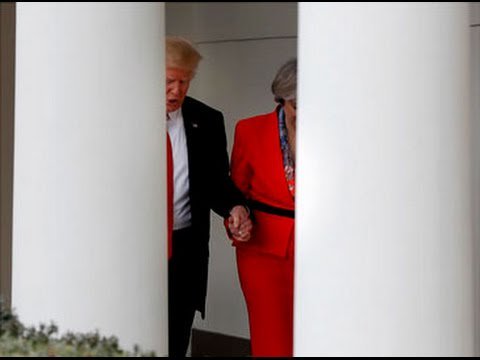 In a new interview, British Prime Minister Theresa May[3] refers to President Donald Trump as “a gentleman” as she explained how it came to be that the President of the United States exited the White House holding her hand.

“I think he was actually being a gentleman,” May told Vogue magazine, laughing about the memory. “We were about to walk down a ramp, and he said it might be a bit awkward.”

May was the first foreign leader to make a state visit to Trump.

“I like to think we got on,” she said in the interview. “I mean, obviously he has, uh . . . it was a stunning election victory, in that he’s someone who has not been involved in politics.”

When asked by her interviewer whether she confronted Trump about his comments on women, comments she had once said were “unacceptable,” she hedged.

“We don’t comment on private conversations that take place. All I would say is, I’ve been very clear: I’m not afraid to raise issues. And the nature of the relationship is such that we should be able to be frank and open with each other,” she said.

If only it were this easy for Trump to win over all of his detractors. Even if you disagree with him on policy, you have to admit that Trump is a pretty cool person.