Pro-Trump students[1] held another Donald Trump rally at Portland University and it got wild. Progressives Today reports[2] that the PSU chapter of Students For Trump held another event on Saturday, April 16th. This time, it was more of a street march affair than a meeting in the cafeteria. They were joined by many pro-Trump members of the community, thanks to the appearance by a crew from InfoWars. The student body communists and other wackjobs from the community turned out in force, again, to counter protest. This time they were joined by members of the Brown Berets and Black Panthers. Good to know the commies and radical racists were in attendance. Lots of screaming and shouting, some pushing and shoving, and a couple of instances where some signs got torn up, nearly erupting in brawls. No sign of the police to protect the rally… just as expected. 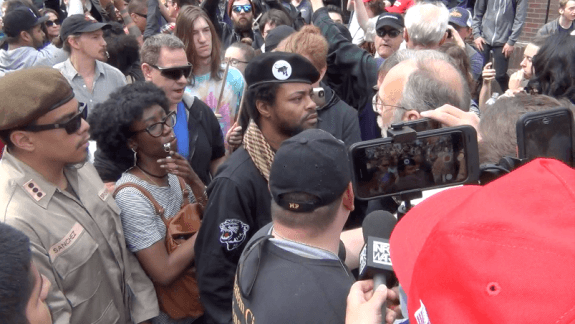 The Students For Trump held a rally and march in Portland on Saturday, which was counter protested again by many of the same individuals who crashed their first meeting last week[4].

The Students for Trump held a march and rally at Portland State University.

This time the Black Panthers and Brown Berets crashed their rally.

I’m surprised there wasn’t a brawl… I mean come on! The Brown Berets and the Black Panthers live for that kind of violence. This rally comes after these same vicious radicals crashed another rally these students held last week inside the school. Once again, the University and police were absent and let them intimidate the students. That’s just wrong. I don’t care whether you support Trump or not, these kids have a right to support whoever they want and hold peaceful rallies. The counter protesters banged on buckets, blew horns, whistled and screamed. They tried to get in the face of Trump supporters. The difference this time… people didn’t back down. This is not going to end well at this rate. The radicals are out of hand and people will only take so much before they fight back. The chaos has only begun for the American Spring. 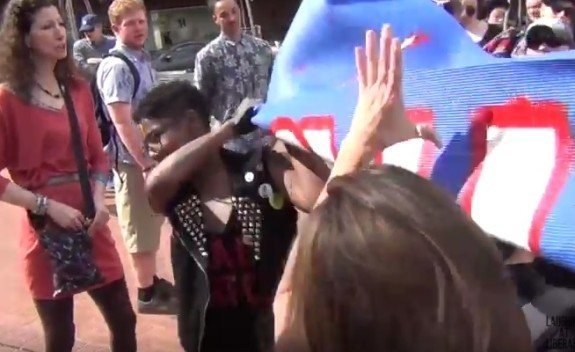