We all knew[1] that Chris Matthews was a fruitloop, but he went way over the line with this one. He had the gall to compare President Trump’s children to those of Saddam Hussein. The butcher of Iraq. Saddam’s two sons were killed by our forces and they deserved a horrific death for their actions. They raped, murdered and tortured because they LIKED it. Such was the offspring of Saddam Hussein. Tell me how Trump’s children are even in the same universe as those beasts? Matthews needs professional help. He’s totally lost it.

I may not agree with everything the Trump clan puts out, but they are a lovely family. And I have never heard of any of them even doing something remotely considered cruel or rude. Yet, Matthews compares them to psychotic murderers. What is wrong with him? Does he even watch the show? Uday and Qusay Hussein were demons straight out of hell. Torture was entertainment to them… it was play. For Matthews to say something like this is such a horrific insult that it boggles the mind he would do such a thing. But he did. If he thinks this will get him ratings, he’s even more of a moonbat than I thought. 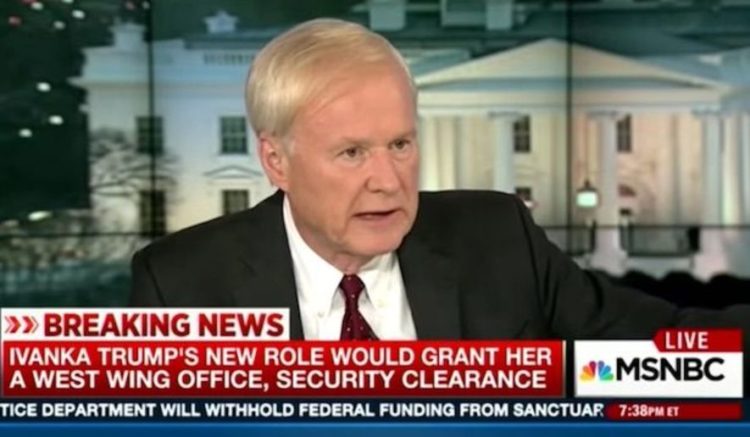 But this latest disgusting comparison by MSNBC’s Chris Matthews –never one to be left off the Looney Tunes hit parade– is far from funny or even mildly amusing.  This week on his ill-watched show “Hardball” Matthews took the bombastic step of comparing the children of our president to those of Saddam Hussein.

The late Saddam Hussein, may he never rest in peace, had two sons, Uday and Qusay Hussein. To say that they were butchers is to put it mildly. Both were killed[3] in U.S. led attacks on July 22, 2003 much to the delight and celebration of the Iraqi people. The UK Telegraph[4] referred to the elder son Uday (39 at the time of his death) as “Saddam’s demon seed” while the younger, Qusay (37 at the time of his death) was liked even less. Qusay had a penchant for rape, torture and murder, reportedly raping women and then killing them afterwards due to their ‘poor performances.’  Of Uday The Guardian[5] wrote, “He was a monster even by the standards of Saddam Hussein’s Iraq, a sadist with a taste for cruelty so extreme that even his father was forced to acknowledge that his first-born son would not be a worthy heir.”

This is low even for Chris Matthews and MSNBC… and that’s saying something. Leftists are on a roll with Rachel Maddow freaking out over two pages of a twelve year-old tax return that showed nothing, Chuck Schumer screaming at people in a restaurant and chasing them out on the sidewalk and now this. You guys must be doing some really good drugs over there. Stop it. At first it was amusing watching them make fools of themselves, now it’s just pathetic.

The Trump children are smart, articulate, brilliant and gifted. The jealousy over this family is simply unhinged from the left. Chris Matthews needs to call it a day. His ramblings have become incoherent and his hatred for Trump and his family borders on pathological. Comparing the Trump kids to Saddam’s kids is evil and disgusting even for the likes of Chris Matthews.