That weasel Senate Minority Leader Chuck Schumer is at his divisive antics again, arguing Tuesday that President Trump is trying to “bully” Attorney General Jeff Sessions in an attempt to push him out of his appointed position and has claimed that the shots directed at Sessions speaks to the President’s “character,”[1] which normally I wouldn’t agree…but when the weasel is right, he’s right…which is a first.

Schumer took advantage of the President’s recent remarks on Sessions and used it as a weapon on the Senate floor: 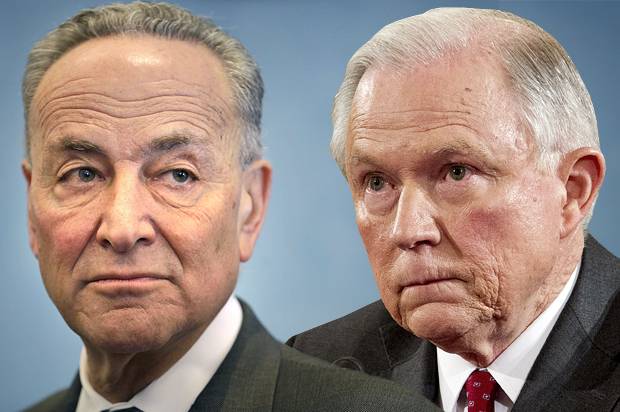 “We should all take a moment to think about how shocking these comments are on a human basis. This was the first person who stumped for Donald Trump, who was with him through thick and thin. And now, even if the president has disagreements with him, which I think are ill-founded, self-centered and wrong, you don’t ridicule him in public, someone who is your close friend. That speaks to character.”

“It’s clear that President Trump is trying to bully his attorney general out of office. How can anyone draw a different conclusion?” Is no one wondering why the President is firing off publicly his beef with his own chosen Attorney General? It just feels like he’s trying to get Sessions to just quit and not muck up his own hands.

As the media has been mentioning non-stop, the multiple remarks from Trump questioning Sessions’ job as attorney general, all started when he recused himself from the Russia investigation. Speaking to the media a number of times in interviews with the media, he claimed that he would never have nominated Sessions if he knew he would recuse himself. The problem with that is that this whole Russian business was not an issue when he hired the guy, so how could that be true? Either way, Sessions has maintained that he will not be resigning, and that’s a good thing for conservatives.