Former CIA analyst Tony Shaffer[1] appeared on Fox Business and was questioned by Deirdre Bolton on leaks in the White House. Shaffer believes that the leaks are coming from both Obama White House holdovers and some Republicans. I can’t argue with that. Which is one of the reasons that security clearances are now being denied after background checks are failed and why tons of pink slips are being issued. He contends Flynn’s resignation was due to leaks, not for what he discussed with the Russians. I kind of think it was both.

Tony Shaffer: “I would put this right at the feet of John Brennan and Jim Clapper and I would go so far as to say the Obama White House was directly involved before they left. Ben Rhodes and those folks… The Democrats are behind this and some of the Republicans are involved with the leaks. So I say ‘Bring it on!’” I agree as well… have the investigation and let the truth be exposed and win out here, one way or the other. 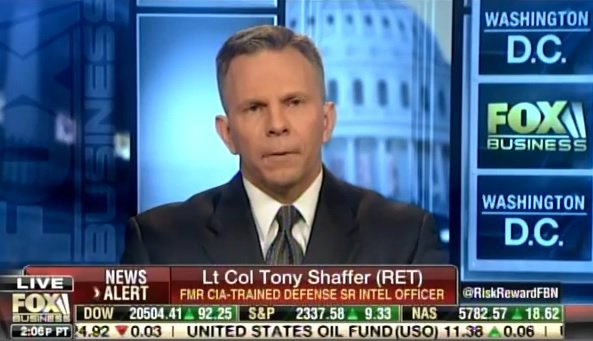 Former CIA analyst Tony Shaffer appeared on Fox Business Wednesday to discuss who he believed was behind the recent intelligence leaks resulting in the resignation of Michael Flynn.

“Are leaks by Obama a problem?” asked Risk and Reward host Deirdre Bolton.

“I’ve watched this very carefully,” Shaffer said. “When you have NBC reporting that they’ve talked to six officials who have seen the transcript, someone is basically giving away both sensitive methods.”

“Which tells me clearly that someone had to have access to that and that is a key issue. Who leaked that information?” Shaffer continued.

The former CIA analyst also noted that Flynn did nothing wrong and did not violate the Logan Act.

There is no doubt in my mind that leftists did indeed target Flynn. But Flynn also brought it on himself. He’s far too cozy with the Russians and left himself open to attack. Having said that, Flynn may not have violated the Logan Act at all. Just because you mention the word ‘sanctions’ doesn’t mean you were clandestinely making a pact with the Russkies. Flynn isn’t stupid. He had to know he was being recorded. At issue here is the fact that he lied to Vice President Mike Pence and it could be that was the sole reason that really did force his resignation.

Regardless, the Washington Free Beacon reported that Obama administration adviser Ben Rhodes has led a secret campaign against Flynn. And it worked. According to this, Flynn was targeted because he strongly opposes the Iran Nuclear deal. I find that very, very plausible. The Obama loyalists conducted a behind the scenes attack against Flynn by injecting damaging stories on Flynn into the national media. Whereas, I don’t condone Flynn lying and I believe his stepping down was the right thing to do, I believe the leaks are a criminal act and those who are responsible should be exposed and prosecuted.

“It’s undeniable that the campaign to discredit Flynn was well underway before Inauguration Day, with a very troublesome and politicized series of leaks designed to undermine him,” a veteran national security adviser told the Free Beacon. “This pattern reminds me of the lead up to the Iran deal, and probably features the same cast of characters.” And if Trump does not purge his ranks of these Obama loyalists, they will target more and more people in his cabinet, as well as Trump himself. Anyone connected to Obama needs to go.