There’s a really good chance that when you blame Donald Trump for your kid being a bully[1], your kid was already a bully. Know who else you can blame? Yourself. Kids learn from parents and if your kid is a bully, then maybe there’s something going on at home causing this child to act out and torture others. Maybe we should examine the CNN anchor Ashleigh Banfield’s home life and what influences from the family cause their child to do harmful things to others. Does she get beat? Does she hit animals? Is she a bad mother? 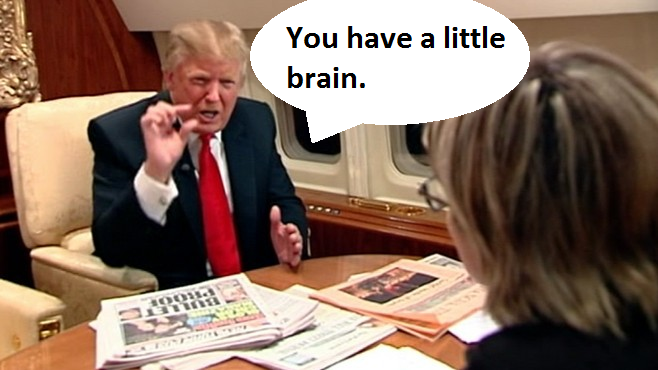 “Look, I have to be honest with you,” she said to Clinton supporter Kelly. “I just had a parent teacher conference yesterday and my fifth grader’s teacher said my son is calling some other kids ‘loser.’ And we have our TV at home on all the time. I’ve tried to say these are not the kinds of words you’re allowed to use, but it is tough. It is hard to do.”

On the contrary, Ashleigh Banfield and her kid’s teacher are idiots. A fifth grader calling others a “loser” is not called bullying, it’s called being a ten year old. Kids in fifth grade are just learning the best part of camaraderie in the sense that boys often torment each other in jest. This lasts until you’re at least 100 years old or have Alzheimer’s. The best of friends can often be found teasing each other. My brothers and I are in our 30’s and we still throw shady jokes at each other any chance we can get.

Live, laugh, love and stop calling every little thing a bullying incident. Save the term “bullying” for when your kid is beat up and lunch money is stolen. Then call the school and set up a meeting to fix it.