Donald Trump’s disgraced ex-campaign manager, Corey Lewandowski[1], was picked up by CNN about five minutes after claiming he was fired by Trump. I contend that Lewandowski is now an independent agent FOR Trump, just like Roger Stone is. That aside, Lewandowski did his job by calling out Obama on his college transcripts. I’m sure the panel thought he would go for the birth certificate, but instead, in a calculated media move, Lewandowski went for Obama’s time at Harvard questioning if he entered as a US citizen. This is meant to draw more media attention to Trump. And it worked… again. 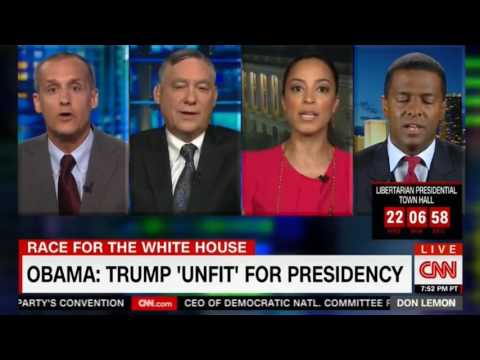 Tuesday night on CNN, he showed America what that means, dredging up a request on President Obama’s college transcripts[3] and asking whether he got into Harvard as a U.S. citizen.

Let’s just say two other people on the CNN panel were pissed at him for bringing it up, and the discussion got heated in a hurry, with one panelist telling Lewandowski:

At least two of the panelists were ticked off. It’s so hard to tell what is real rage these days and what is theater, but they appeared incensed. Lewandowski learned well from his mentor. Since Obama has started attacking Trump on the campaign trail, he is now fair game according to his lap dog. He did get slapped with Trump not releasing his tax returns. Both sides are dirty in this campaign. It’s now a contest of who can out-lie who. No one got anywhere… Lewandowski did not get Obama’s Harvard transcripts and Angela Rye did not get Trump’s tax returns. One step forward, two steps back. These people need new talking points.