The media has their panties in a twist over President Trump smacking Sen. Kirsten Gillibrand (D-NY) on Twitter yesterday. He tweeted, “Lightweight Senator Kirsten Gillibrand, a total flunky for Chuck Schumer and someone who would come to my office “begging” for campaign contributions not so long ago (and would do anything for them), is now in the ring fighting against Trump. Very disloyal to Bill & Crooked-USED!” Then social media blew up and every liberal out there had their minds go immediately to the gutter and come up with that Trump was saying that Gillibrand would offer sexual favors for contributions. Get real.

Sarah Huckabee Sanders was having none of it during her press conference. After a literal meltdown by Mika on Morning Joe over this and Elizabeth Warren going on about slut-shaming Gillibrand by Trump (whereby she hysterically called Gillibrand a slut inadvertently), Sanders wasn’t about to get mired in this nonsense. Gillibrand and a long line of Democrats are now demanding that Trump resign in the wake of Senator Al Franken stepping down over sexual misconduct allegations. The difference here is that Franken has evidence against him doing those deeds, Trump does not and has not done what they accuse him of. 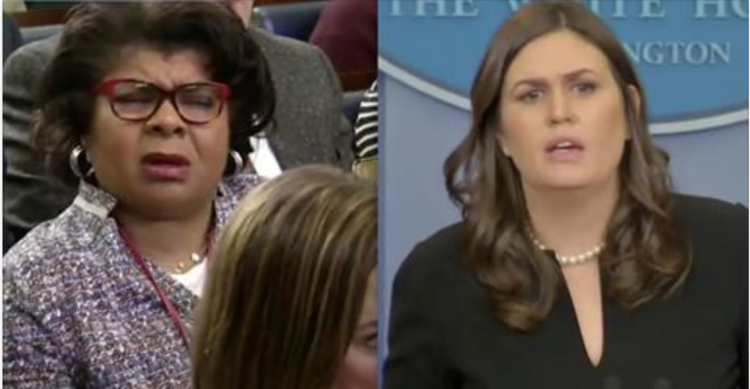 One can hardly blame President Trump for firing back at Gillibrand on Twiiter, calling her a “lightweight” and “a total flunky for Chuck Schumer.” Because she is. She also has her sights set on running for the presidency in 2020 as does Warren. Anyone who has watched Trump at all knows that his comment on “begging for campaign contributions” and his claim that she “would do anything for them” have to do with these political hacks groveling for money and wanting to strike deals for it. Trump has said this about both sides of the political aisle and he has hit men and women for it.

Most of the questions at the White House press briefing yesterday were over this stupidity. Of course, the most egregious question came from CNN. April Ryan asked: “Is Gillibrand owed an apology for the misunderstanding of the president’s tweet this morning? Because many, including the senator, think that it’s about sexual innuendos.” Sarah nailed her over it: “I think only if you’re mind is in the gutter would you have read it that way. … So no.”

Ryan wasn’t done: “No, it’s not. … What he said was open. And it was not mind in the gutter.” Sanders then made herself very clear: “He’s obviously talking about political partisan games that people often play and the broken system that he’s talked about repeatedly. This isn’t new. This isn’t a new sentiment. This isn’t new terminology. He’s used it several times before. As I said a few minutes ago, he’s used it several times before referencing men of both parties, in fact. And so I think that there — if you look back at the past comments he’s made, it was very clear what his reference was.”

All of this over a tweet that didn’t mean at all what they claim it does. A whole news cycle has been spent on one lousy statement. Again, CNN is where journalism goes to die.

Lightweight Senator Kirsten Gillibrand, a total flunky for Chuck Schumer and someone who would come to my office “begging” for campaign contributions not so long ago (and would do anything for them), is now in the ring fighting against Trump. Very disloyal to Bill & Crooked-USED!