Man, it doesn’t get any more ironic or stupid than this.[1] A CNN reporter cornered an elderly black Trump supporter and tried to get him to say how racist Trump is. Do they even watch the show? He’s black AND he supports Trump… ergo he does not think Trump is a racist you idiot. I don’t blame this guy for being sick of this crap. Not one bit. He angrily slapped the guy verbally: “I’m sick of this race and divide!” the supporter exclaimed. “It’s always divide and conquer! It’s a scam! And I know it’s not going to get on CNN!” Good for him. 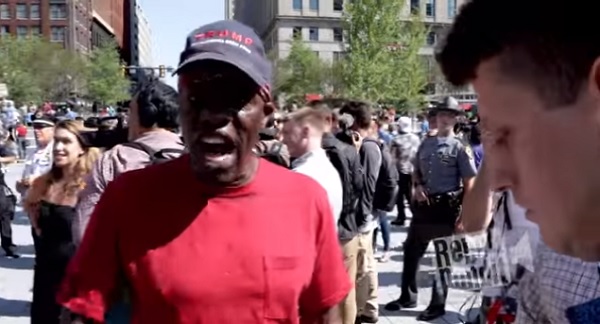 A black Donald Trump supporter scolded an apparent CNN reporter[3] outside the Republican National Convention on Thursday after he was asked what he thought about “white supremacists” supporting the GOP candidate.

A black Trump supporter scolds a reporter outside the RNC in Cleveland. (YouTube/Rebel Pundit)

The Trump supporter, identified as Kenneth, expressed his opposition to Black Lives Matter and the Clintons before the reporter shifted the focus, causing the interview to go off the rails.

He’s right about CNN – no way would they ever air that to their audience. He continued: “I’m out here making sure I express my support for Mr. Donald J. Trump,” the unnamed man continued. “And I’m fighting back against people like Black Lives Matter, which CNN supports along with the Hillary Clinton foundation and Bill Clinton foundation, the traitors to this country.” Now, that is truth and should be plastered everywhere, but it won’t be. The back and forth got contentious and the reporter got defensive. Well, if you didn’t try trapping people and using race as a weapon, then you wouldn’t need to fight with people, would you? And by the way, that is not just doing your job. Unless of course, your job is to be a liberal hack.