A Concerned Hannity Issues WARNING To Trump – ‘What Are You Doing!?’ VIDEO

First off[1], I’m not a fan of Sean Hannity. I don’t care for the way he has behaved during this election cycle. But he does have a point when he tells President-elect Donald Trump quoting former President Harry Truman: “If you want a friend in Washington, get a dog.” Those are words to live by inside the Beltway. You can’t trust anyone there ever. I have been very concerned with some of the people that Trump has been meeting with as well. The ones on the left anyway. I’m not concerned over Romney, because although he’s a Progressive on the right, I think he’s a good man. He and Trump both said nasty things about one another and seemed to have patched up their differences. Campaigning and entertainment is giving way to reality.

Having said that, Trump meeting with Al Gore is abhorrent. The guy reminds me more and more of a demon. His meeting with Leonardo DiCaprio is a waste of time, even if he did promise green jobs. And meeting with Rahm Emanuel is obscene. Although that meeting may have been about crime in Chicago and helping the police there… who knows. The heart of the matter is that these are all corrupt leftists who lie at the drop of a hat. And Trump saying that he likes Obama is not going to win him points out there. Obama is hated… Trump may think he is striving for unity, but all it does is make people suspicious of you when you join hands with Marxists. 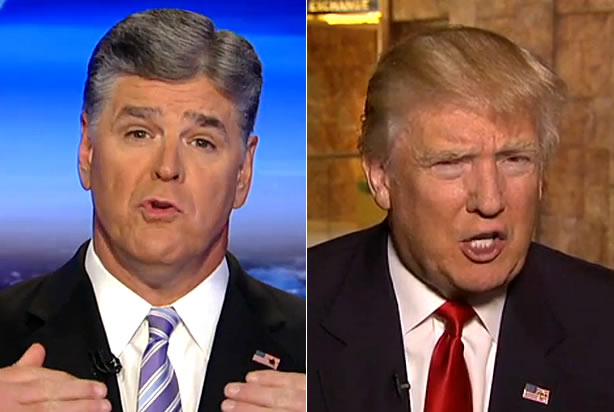 Fox News host Sean Hannity has issued a dire warning to President-elect Donald Trump, advising him to watch out for the politicians in Washington who claim to be on his side.

“The people of Washington, D.C., and the political elites, well, they’re not President-elect Donald Trump’s friends and they never will be,” Hannity said during the opening segment of his show Wednesday.

He also warned[3] Trump about extending an olive branch to people who were staunchly anti-Trump throughout the election.

“Trump has been meeting with the likes of Mitt Romney, Chicago Mayor Rahm ‘Rambo Dead Fish’ Emanuel and even Al Gore. My advice to the president-elect tonight is, be very careful,” Hannity said.

Trump had a very close relationship[4] with Hannity during election season and the two have been friends for years. In September, Hannity backed up[5] Trump’s statement that he opposed the Iraq War before it started, saying, “He would watch the show and call after and we argued a lot about it.” At one point during the first presidential debate with Democrat Hillary Clinton, the then-Republican nominee lamented[6] to the moderators that “no one calls Sean Hannity” to verify the truth.

Hannity may be friends with Trump, but I doubt that Trump will listen to him much. In the end, he’ll do what he thinks will work and win. The political elite of DC are not Trump’s friends and they never will be. He would do well to take Hannity’s advice on not trusting any of them. I think Trump is a smart man and he knows this. He is surrounding himself with strong individuals who are very capable… they are certainly not those who are as easily corruptible as the Democrats and Rinos are.

I believe a great deal of what you see is for show here. Trump is a master negotiator who is also morphing into a diplomat of sorts. But he’ll say one thing and then do what he thinks needs to be done in the end, right or wrong… Trump is his own man. Where I disagree with Hannity is telling Trump to shun anyone on our side who opposed him in the election. He’s not doing that and it is a good thing… he is much stronger if he brings everyone together on our side, whether they supported him or not. In the end, some of your greatest allies may have also been some of your greatest foes. Perhaps Sean should read The Art of War.