Phyllis Schlafly[1], a renowned conservative activist and legend, endorsed Donald Trump yesterday officially. She did so because of his stance on illegal immigration. I agree with her on that issue. I also wholeheartedly agree with Trump stopping the influx of unvetted Islamic refugees. There are a number of things I don’t agree with Trump on though. Schlafly is a huge endorsement for Trump… she is widely respected in conservative circles and did a fantastic job of calling Rubio out on his Amnesty tactics. I have long admired her. We may not agree on the candidate for the nomination, but overall, I have always been of the same mindset as Schlafly. This is definitely a feather in Trump’s political cap. 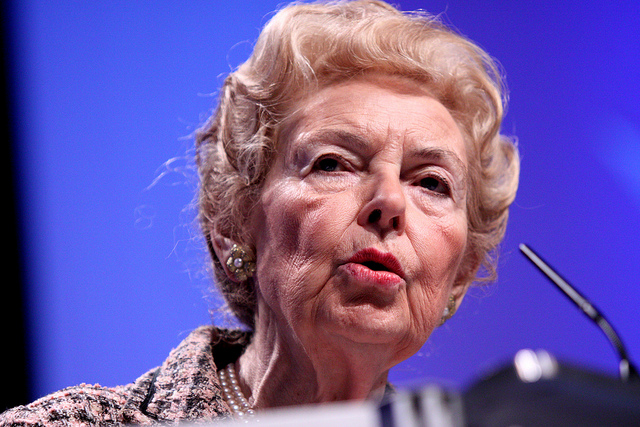 Phyllis Schlafly, the 91-year-old icon who helped launch the conservative movement in the 1960s, announced her endorsement of Donald Trump[3] for the GOP nomination for president yesterday afternoon.

Schlafly made the endorsement at a Trump rally in her hometown of St. Louis. She said that Trump was the first leader of the GOP in a long while she saw as leading the party to victory[4].

“I know who you came to see, so I’ll be quick,” Schlafly said, according to The Washington Post[5]. “I think he has the courage and the energy — you know you have to have energy for that job — in order to bring some changes. To do what the grass roots want him to do because this is a grass-roots uprising.

I can understand how she thinks Trump is a winner. He has a huge following. But then again, so does Ted Cruz. And Cruz is a staunch constitutionalist and one of the brightest minds out there. Trump has never even read the Constitution and I have severe doubts that he will adhere to it. Schlafly has always been against picking moderates. Her endorsement was marred by riots and violent outbreaks that held Trump at their center. Trump has established a foundation of an “acceptable level” of violence by making it clear that he condones a “certain amount” of violence as being justified by the frustration and anger of the voters. I doubt this is part and parcel of Schlafly’s political ideology. Nevertheless, she has endorsed him for better or worse. Ted Cruz is a great fan of hers. Personally, I believe she should have given the nod to Cruz. 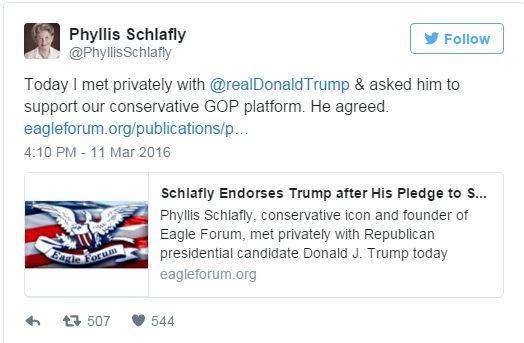