Conservatives SHOCKED by Who Trump Just Invited to Play Golf

Squint.[1] Didn’t see that one coming. Now, I am beginning to wonder if all the threats against the Freedom Caucus was simply a negotiating/intimidation tactic to see if they would back down. Now that they haven’t, Trump is considering Rand Paul’s plan… because that’s who he tee’d off with this weekend. They discussed a number of things including healthcare. Budget director Mick Mulvaney also joined the play. Could it be that Trump is considering Paul’s plan? That would be terrific and something I believe conservatives could support. Never underestimate Donald Trump… it backfires.

And may I just say that I never considered Rand Paul a small guy… but when standing next to President Trump at 6’2″, it’s a stark contrast. Trump is a big guy and imposing. But Rand Paul is no mouse and I’m sure he held his own. They were all smiles on the golf course and it looked like it went well. Paul left the outing saying he was hopeful that Republicans could repeal Obamacare. Perhaps there is still hope after all. 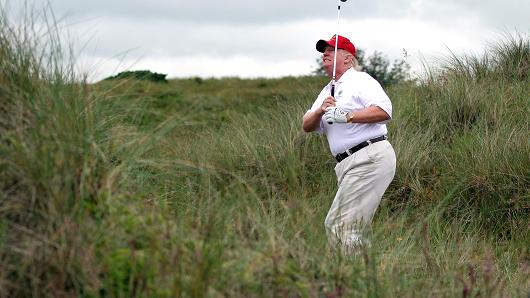 President Trump brought Republican Sen. Rand Paul to Trump National Golf Club in Virginia on Sunday to play golf with him, a little more than a week after the party’s healthcare bill failed.

Paul had predicted in early March that the House bill would not pass the Senate. Instead, he proposed his own healthcare bill, though it was not taken up by Congress.

After Paul’s comments, Trump took to Twitter to put pressure on the senator to support the healthcare bill.

“I feel sure that my friend @RandPaul will come along with the new and great health care program because he knows Obamacare is a disaster!” Trump wrote at the time.

Trump hinted[4] earlier Sunday on Twitter that there’s potential for Republicans to unify around healthcare. His tweet followed a week of attacks on the conservative House Freedom Caucus after the failure of the American Health Care Act.

“We had a great day with the president. Played some golf, and we talked and we talked about a little bit of health care. I continue to be very optimistic that we are getting closer and closer to an agreement on repealing Obamacare,” Paul told White House pool reporters on Sunday afternoon. Paul was a staunch opponent of the House bill to repeal and replace Obamacare that Republican leaders were forced to pull before a full vote on the House floor.

Remember, Rand Paul introduced a bill originally on all this that the Republicans wouldn’t even look at. Looks like they may have changed their minds. I guess we will see. Deal making on the golf course? Works for me.

Anybody (especially Fake News media) who thinks that Repeal & Replace of ObamaCare is dead does not know the love and strength in R Party!

Talks on Repealing and Replacing ObamaCare are, and have been, going on, and will continue until such time as a deal is hopefully struck.

I had a great time today with @realDonaldTrump[7] and believe we are getting closer to an agreement on health care!

On return to WH @RandPaul[9] said it was "a great day" golfing with the Pres. "Very optimistic" nearing agreement on repealing ObamaCare." pic.twitter.com/x9CTWeEZ4v[10]