Donald Trump’s campaign manager, Kellyanne Conway, appeared on CNN with Dana Bash. And inevitably, the conversation that was recently leaked, where Trump talked about trying to sleep with a married woman and how he would walk up to women and kiss them, or “grab them by the p*ssy” because he’s a star and therefore, could get away with it. The media has run with the audio, while Republicans have had mixed reactions to the conversation; some have promptly dropped their support of Trump, while others, like Conway, have stood by him and tried to minimize the outrage. And that’s exactly what Conway did in her interview with Bash[1]. 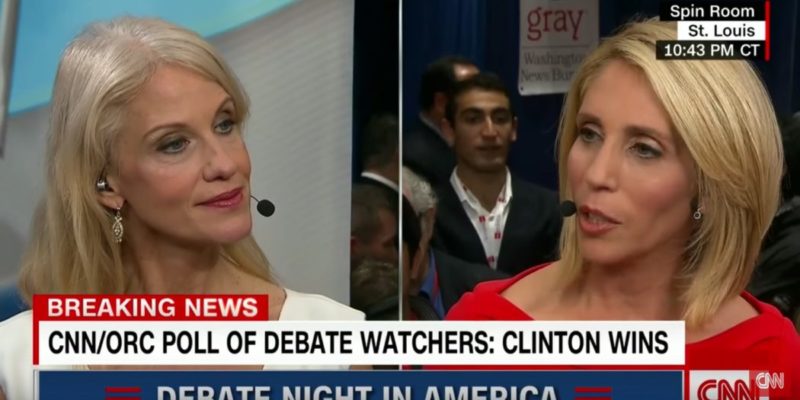 Conway insisted that the panel needed to stop using the words “sexual assault” to describe Trump’s statement. She also told them that they were hypocritical for refusing to say or do anything about the women Bill Clinton had victimized, who were present at Sunday night’s presidential debate.

According to Bash, the media doesn’t need to bring up Clinton’s accusers, because that was all covered years ago during the Lewinsky scandal and during his campaign for president. Yet they have no problem interviewing people like Alicia Machado over and over again.

The problem here is with both Conway and the media. They’re both failing here, on multiple levels. Conway is failing in her fundamental role as a woman, by excusing and covering up Trump’s conversation. Sorry, Conway, but what Trump described was sexual assault. And considering that there are multiple allegations to back up what his words said, it’s not wrong that this conversation is taken seriously. Trump and his supporters are no better than Hillary by doing everything they can to cover it up, make excuses and go into attack mode… all so they can promote Trump’s political career. It literally makes them exactly the same as Hillary Clinton, the person they claim to despise so much.

But the media, meanwhile, is also wrong. They bury Hillary’s scandals every chance they get and pretend that they’re unbiased while they do it. The media, the Trump campaign, the Clintons… they’re all terrible. And no matter which of them wins, the American people lose.