Liberals and Democrats in general will tell you that it’s not okay to generalize and make blanket statements about people because of some “-ism” or another. Of course, they say this in the same breath where they call people “racists” if they don’t support a black actor/President/Congressman/human.

Democratic Representative from New York Hakeem Jeffries stated that “every racist in America voted for Donald Trump,” which is extremely hurtful to the black and Latino Trump voters who were told by liberals that they can’t be racist due to the color of their skin. 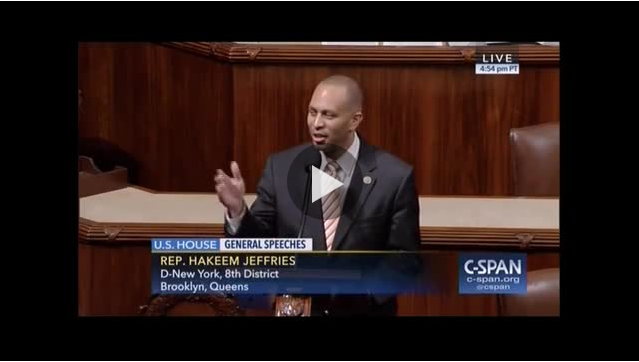 During his speech, Jeffries made it very clear that he thinks all of the bad things (real and imaginary) that are happening in the United States today are because of Trump, Republicans and anything that he doesn’t agree with.

“Since January 20th, we’ve seen a disturbing increase here in America in anti-immigrant, anti-Muslim, anti-black, anti-LGBT and anti-Semitic acts,” he claimed. “And the question is, is this just a coincidence, or could it possibly have something to do with the election of the 45th president of the United States of America? Now, in part, what we’re seeing is connected to a historic backlash that has often occurred throughout this journey that we’ve been on here in America, that whenever we make significant progress, there’s always a backlash amongst some in America who’ve got a problem with the fact that we’ve done things designed to be more consistent with our values of liberty and justice for all, equal protection under the law.”

But it gets better. After listing some historical examples, he goes on to laud President Barack Obama for being President while black.

“And then, of course, we’ve got Barack Obama, who was elected in what many of us viewed as an incredible step in the right direction, African-Americans having gone from the outhouse to the White House,” Jeffries stated. “Eight years of tremendous progress in moving this country forward, followed by the election of Donald Trump, a man who spent five years perpetrating the racist lie that Barack Obama was not born in the United States of America. And many of us are wondering, why were so many people who worship at the altar of white supremacy drawn to Donald Trump’s campaign? What was it about this individual that so many folks dripping in hatred flocked to his candidacy? That’s not to say that every American who voted for Donald Trump is a racist. We do know that every racist in America voted for Donald Trump. that’s a problem.”

I could point out that the most hateful, racist organization ever created in the United States was done so by Democrats and the most popular “women’s health clinic,” Planned Parenthood, was founded by a racist eugenicist who saw blacks as inferior and in need of culling.