Uh yeah… I don’t like this at all. Remember when President Trump made a YUGE deal out of saying Merry Christmas? Not so much. He insisted that “you’re going to see” “Merry Christmas” instead of the politically-correct “happy holidays” if he was elected president. But he just sent a “holiday reception” invitation to White House reporters. “The President and Mrs. Trump request the pleasure of your company at a Holiday Reception to be held at The White House on Friday, December 1, 2017 at two o’clock,” the invitation reads in full, according to the Washington Examiner. Now, I’m going to give Trump the benefit of the doubt that he did not approve this. We’ll see.

The invitation has a gold presidential seal and tells reporters to show up at the southeast entrance of the White House. All will be forgiven if he hands each of them a stocking stuffed with coal. Just sayin’. The email sent to the reporters also said that White House reporters will be receiving an “engraved invitation” for Trump’s holiday reception in the mail at a later date. Here’s why I’m giving Trump the benefit of the doubt… the email, unlike the actual invitation, has a title that says “White House Christmas Reception.” The body of the email also mentioned Christmas.

Christmas is the principle of the thing with me. As a Christian, the holiday holds deep meaning for me, but it is far more than that. A lifetime of family memories is tied up in the holiday and I love the beauty and pageantry during the season. I cherish the giving and the love shown others during this time of year. I believe that President Trump also truly shares those sentiments. When he was campaigning for the presidency, he was adamant that he would use “the word Christmas” if he became president.

Ex-nay on the ‘holiday reception’ crap. Trump should reissue the corrected invitations in the spirit of the holiday and in recognition of the birth of Christ. Please keep your promise to say ‘Merry Christmas’ – it means the world to all of your supporters. 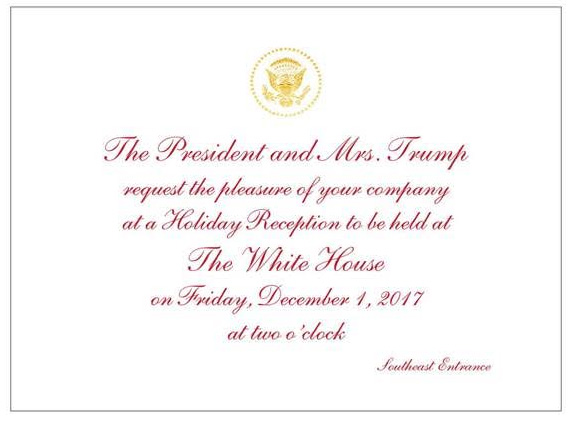