Elizabeth Warren is just disgusting.[1] She had the nerve to threaten President Trump just recently with, “Donald, you ain’t seen nasty yet.” Gross. Of course, conservatives on Twitter flayed her alive for that snark. She read from her new book at a town hall event and ranted on about how the Republicans were destroying the middle class and women’s rights. So pathetic. All of it is a lie. The left hails this woman as some kind of economic genius… she’s a moron and a liar. The character of a nation, may not be the character of its president, but it sure as hell is not the soulless character of Elizabeth Warren.

I don’t want to see this woman’s kind of ‘nasty’. It makes me want to bleach my brain and eyes. Sick. Why do these Democrat women keep telling all of us how nasty they are? Whatever definition they envision for that word, it doesn’t apply to them and the visuals make you want to hurl. We’ve had more than our fill of ‘nasty’ from the left. Please feel free to keep it to yourself. Forever. 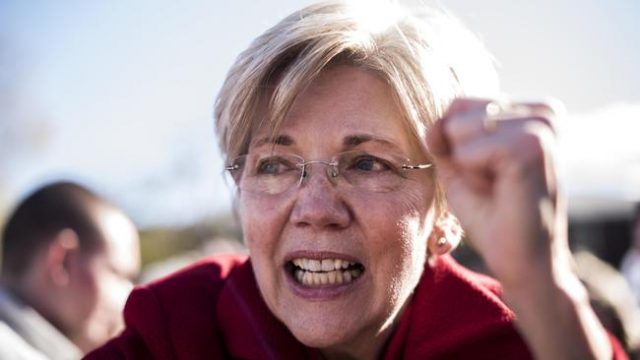 Sen. Elizabeth Warren (D-Mass.) has a warning for President Trump: “Donald, you ain’t seen nasty yet.”

Warren read aloud from her new book “This Fight is Our Fight: The Battle to Save America’s Middle Class” and took questions at a town hall event in New York Friday, HuffPost reported[4].

Warren blasted Trump for his economic policies, saying they are hurting the middle-class Americans who voted for him.

“What Donald Trump and the Republican majority in the House and the Senate want to do to us, is they want to deliver the knockout blow to the middle class,” she said.

Possibly the nastiest women on the planet are Hillary Clinton, Elizabeth Warren, Nancy Pelosi, Kamala Harris and Maxine Waters. They are horrid human beings and all of them are Marxist Democrats. That tells you something. These women don’t have an original idea among them… they keep screeching over being ‘nasty’ and ‘persisting’ and ‘resisting’. Give it a rest already. It’s like it’s that time of the month for these sea hags every day. Yes, I went there and the feminists can stuff it.

This moonbat delusionally claims that people were full of “optimism and hope” at the Women’s March at various places across the country. No, just bitterness, resentfulness and hatred. How does Madonna ranting about how she thought about blowing up the White House, or Ashley Judd assailing Trump, accusing him of incest and saying she was as “nasty as the blood on her sheets,” communicate optimism and hope? It doesn’t. It just shows these hose beasts for what they are… nutty, violent, hateful, radical leftists who think they actually matter. Memo to Fauxcahontas… you don’t.

Then she pulled up her shirt. https://t.co/iwXFjKTKXF[8]

That's Mr. President to you, Liz

actually when I saw this pic, I saw it.