At first. I wasn’t terribly concerned about the leaks coming out of the White House. In my opinion, it was the equivalent of tattling on your sibling because you want your parents to think of you as “the good kid.”

The longer this goes on (how in the HECK has it only been 6 months? It feels like so much longer.), the more worried I become. Not necessarily because the content of the leaks are damaging, but because the media is so desperate to destroy President Trump that they are willing to publish anything to attempt that. This could even include national security information, necessarily private deals and military insight – all of which our enemies would love to get their hands on. 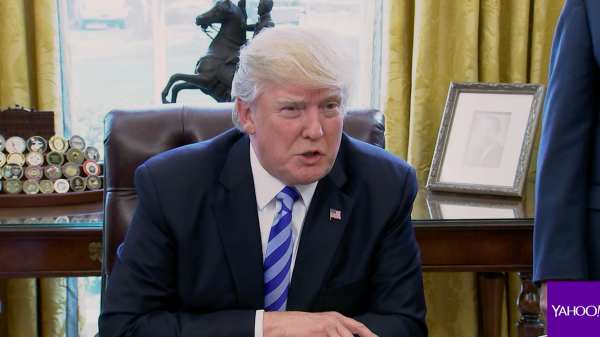 The Washington Post has been very obviously anti-Trump from the beginning and they don’t ever waste an opportunity to make him look like a terrible President. They’re more than happy to publish the transcripts from private conversations between our President and other world leaders, and have done so on more than one[2] occasion.

Even Jake Tapper tweeted the story:

Not surprisingly, his conversation with Mexican President Enrique Pena Nieto focused on the border wall and how it was going to be funded. He insisted that one way or another, via tariffs or a blank check from the country, Mexico will be paying for the wall. Nieto refused[5].

“We find this completely unacceptable for Mexicans to pay for the wall that you are thinking of building,” Pena Nieto told Trump in late January. “I understand, Mr. President, the small political margin that you have now in terms of everything you said that you established throughout your campaign. But I would also like to make you understand, President Trump, the lack of margin I have as president of Mexico to accept this situation.”

Trump replied that the solution is simple: a trade tariff in the 10 or 15 percent range on the border to pay for the wall and also address the trade imbalance between the two nations.

In a conversation with Australian Prime Minister Trumbull, Trump made his stance on taking in Middle Eastern refugees very clear:

“This is a stupid deal,” said Trump. “This deal will make me look terrible.”

The president said the Democrats lost the election because of “stupid deals like this.”

“This is what I am trying to stop. I do not want to have more San Bernardino’s or World Trade Centers. I could name 30 others, but I do not have enough time,” Trump said.

What I want to know is if the Washington Post plans to publish everything that is leaked to them, regardless of content, or if they care about their country enough to vet these things before putting them out on the Internet for everyone in the world to see.