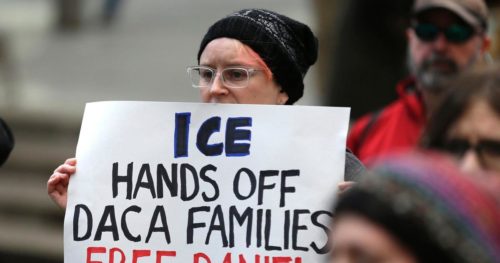 DACA, the deferred[2] action for childhood arrivals act, may soon be only a forgotten dream if President Trump does what he is signaling. The program was put into place by Obama. It currently is the basis for well over half a million illegal minors, known as ‘dreamers,’ being in the United States. And Trump, by way of keeping his campaign promises to rid this nation of damaging Obama era immigration policies, is apparently planning to end the program this coming week.

Of course this has the pro-illegal alien crowd in a tizzy. It’s clear that “they just can’t even.” Dire predictions of youngsters being herded like cattle across the border and back to Mexico or any one of many other Central and South American nations are being made and believed by gullible Leftists around the nation, including DNC Chair Tom Perez, who claimed ending the program would be a “moral disgrace.”

Trump himself seemed to alleviate this concern when he told ABC News previously this year that the program’s participants “shouldn’t be very worried. I do have a big heart. We’re going to take care of everybody.”

A group of ten Republican state attorneys general in June requested that Trump end DACA, without necessarily revoking permits that had already been issued. And further, if the federal government did not remove DACA by September 5, the attorneys general said they would file a federal court challenge to the program in Texas.

So the Democrats and the Left continue their frenzied hand wringing about eliminating DACA, while most of the nation wants something done about the problem of illegal immigrants. Tom Perez thinks it would be a moral outrage? The only moral outrage here, Mr. Perez, is that you and your party care more about the supposed rights of illegals than you do about protecting the health, jobs, safety and government resources of legal Americans. So, forgive us if we don’t take your claims of outrage seriously. It’s an outrage that you can’t get behind eliminating, to the extent that we can, illegal immigration.

To Perez and others who think non-citizens come before taking care of Americans, Trump might just say “dream on.”