President Trump gave a magnificent speech[1] in Poland today. The Polish people cheered him on and on and on. I have not seen them that excited about an American leader since Ronald Reagan. And he spoke directly to their hearts. He spoke of faith in God and the courage of Poland. He talked of history and how Poland defeated communism and Russian aggression. He spoke of fighting Islamic terrorism and the crowd roared.

The Polish people are deeply religious and patriotic. They remember Nazi Germany and the horrors it brought to their people. And now they fear Russia attacking them and Islamic terrorists overrunning their borders. President Trump’s overriding message during his speech was an homage to God and the deep roots of faith in our families and homes. He pointed out that to survive, we must be a moral people and that is true. All the money in the world and the biggest military might out there won’t save you from collapse from within if you have no faith in God and no principles to stand upon. 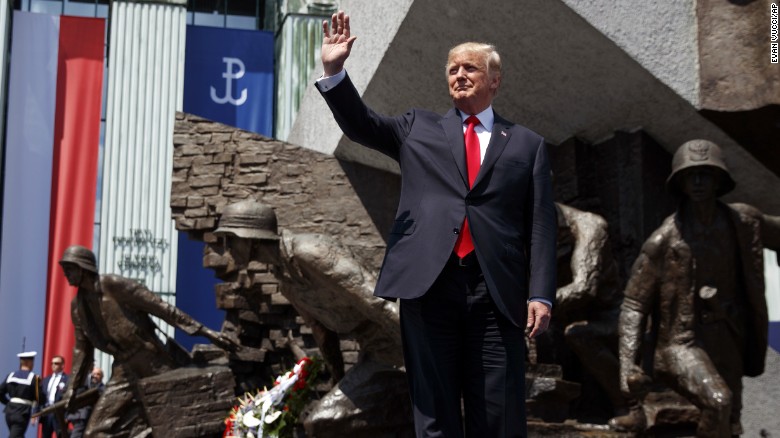 In a speech [3]in Warsaw, Poland Thursday, President Donald Trump defended Western values, while applauding the courage of the Polish people through history and speaking out against Russian aggression and Islamic terrorism.

While speaking[4] to thousands of Poles in Warsaw’s Krasinski Square, which houses the monument commemorating the 1944 Warsaw Uprising against the Nazis, Trump rallied America’s allies against “dire threats” facings Western civilization, but also saying that “the West will never, ever be broken.”

Trump praised the Poles who rose up against communism in the Soviet Union.

The next part is something I thought I would never hear from President Trump, but I was pleasantly surprised. Trump actually admonished the Russians to cease their regional aggression in eastern Europe. Mic drop. “We urge Russia to cease its destabilizing activities in Ukraine and elsewhere, and its support for hostile regimes including Syria and Iran, and to join the community of responsible nations in our fight against common enemies and in defense of civilization itself,” Trump said. And to put the cherry on top[5], Trump has authorized our military to attack Iranian-backed forces in Syria. Nice.

Perhaps the very heart of Trump’s speech had to do with Islamic extremism: “We must stand united against these shared enemies to strip them of their territory, their funding, their networks, and any form of ideological support. … While we will always welcome new citizens who share our values and love our people, our borders will always be closed to terrorism and extremism,” he said. Trump went on to say that we would fight Jihadists and terrorism. That the US would put an end to the Jihadist bloodletting. I pray that is true. Trump put forth that it’s not “if” the West could survive, but whether the West “has the will to survive” in the fight against Islamic extremism. That’s the million dollar question, right there. We will either defend our values and our way of life, or capitulate to barbarians.

The President was warmly greeted in Poland and I enjoyed his speech. We will see what transpires tomorrow in Russia. But Trump came across as an incredible leader today… one with God on his side.