And here come the charging RINOs![1] Intent on stopping President-elect Donald Trump from building a wall on the border. You’ll recognize the names… it’s the same freaking asshats every single time: Lindsey Graham, Jeff Flake and Lisa Murkowski. They join Turban Durbin on drafting a measure that would allow illegal alien children to stay in the US. Uh, no. In this particular instance, the sins of the father and mother are the sins of the child. You cannot justify breaking the law because they are children. They should stay with their family in their country of origin until they come here legally… the right way… through the front door, not the back.

I truly hope that Trump is not softened by cries from progressives about the ‘poor children’. It’s another Trojan Horse. And it would seem that the support in Congress to actually build a wall has suddenly evaporated. Instead they want more fencing, patrols, drones and other security measures. Trump promised a wall… I hope he keeps his promise. But anything at this point would be better than it is now. However, I will say this… if they do this half assed, it won’t work and we’ll be right back where we started. This needs to be approached seriously and I know that many on Trump’s team are very determined to make this happen. Illegal immigration and refugee resettlement are killing this great country. 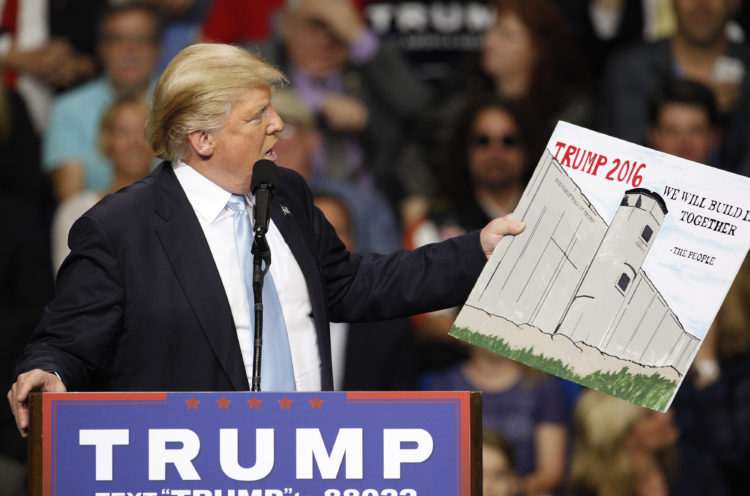 Three Republican senators are working with Democrats to shield about 750,000 young undocumented immigrants from deportation if Trump cancels a 2012 order from President Barack Obama that let them stay in the U.S.

Lawmakers want to “ensure that children who were brought here by their parents, through no fault of their own, are able to stay and finish their education and continue to contribute to society,” said Republican Senator Jeff Flake of Arizona. Republicans Lindsey Graham of South Carolina and Lisa Murkowski of Alaska are joining him on a measure drafted by the No. 2 Democratic leader, Dick Durbin of Illinois, that will be introduced after the new Congress convenes Jan. 3.

Trump’s campaign was largely powered by his get-tough stance on immigration. A Pew Research Center poll in August found that 79 percent of Trump voters want a border wall, compared with 38 percent of all registered voters.

But among lawmakers in Congress, the desire to build a wall along the entire 1,933-mile border with Mexico has evaporated. Republicans in both chambers instead support more fencing, border patrol agents, drones and other resources to curb illegal entry. House Homeland Security Chairman Michael McCaul said he’ll offer a bill with some of those steps in January.

What about cutting the entitlements? Anyone working on that? It’s as important as the wall. Heavy security needs to go on the border… the kind with guns and shoot to kill permission. The wall should go up and armed National Guardsmen and Border Patrol agents should be stationed all along it. There should be drone surveillance and high security entrance points. There should be database tracking. All of this needs to be implemented, but the weenies in Congress are unlikely to have the stomach for it.

It would seem we don’t have real Republicans anymore. Today’s Republican looks more like a Democrat. And the Democrats have become Marxists. I said that when Trump was elected that I highly doubted a wall would be built. I also have grave doubts that he will actually put a total moratorium on Islamic refugees until they can be thoroughly vetted. Trump’s presidency cannot just be about jobs. The border and refugee issues are killing us. Trump’s supporters are now beginning to waffle on demanding the wall and stopping not only illegal immigrants, but refugees as well. If those go by the wayside, then most of this has been for nothing. America will be watching.