Donald Trump appeared on “60 Minutes” with his family by his side: wife Melania and children Ivanka, Eric, Donald Trump Jr. and Tiffany. But while Trump has not received much criticism, Ivanka has now come under fire… for something she wore[1]. 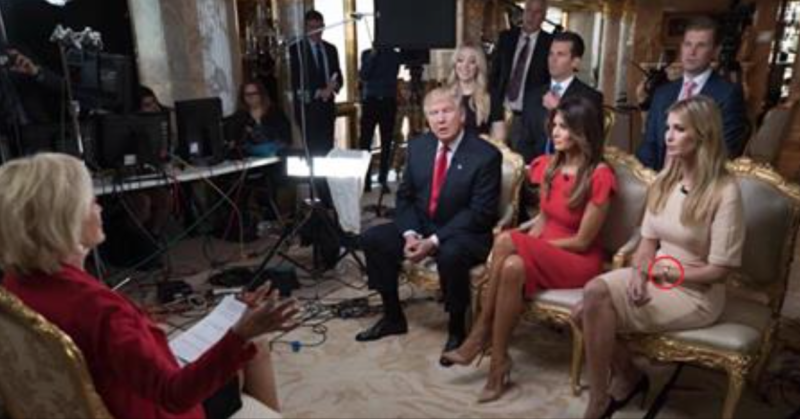 During the interview, Ivanka sported a $10,000 bracelet, said to be one of her favorites, from the “Metropolis” collection of her own Ivanka Trump fine jewelry line. A style alert was released ahead of the interview:

People on social media were quick to weigh in:

Ivanka appeared on nat'l TV w/ Donald to promote her jewelry but feels real miffed that her brand is being "politicized." #GrabYourWallet[7] pic.twitter.com/4YezzgK7fu[8]

Ivanka Trump is using a "60 Minutes" appearance to hawk her jewelry. Yes, the Beverly Hillbillies are coming to DC. https://t.co/Ynqn0eWkcK[10] pic.twitter.com/IHwksGIQwH[11]

Ivanka needs security clearance to add people to her jewelry mailing list and I have to say, I think that's very fair.

This isn’t the first time Ivanka has taken the opportunity to promote her clothing line. In July, she was heavily criticized for using her speech at the Republican National Committee as another “fashion alert” that promoted her business:

Being fashionable is not the problem; look at Kate Middleton, who has been a notorious style icon since marrying Prince William. The shoes and clothes she wears almost immediately sell out. But sending out a “fashion alert” pimping your brand every time you make a public appearance on behalf of your father, who has been elected president, is a little tasteless. (Sorry, Ivanka.)

Ivanka isn’t the only presidential family member that has tried to cash in on the president’s success, though. Jimmy Carter’s brother, Billy, created a controversial brand of beer called “Billy Beer,” a move that the president allegedly did not appreciate. It was as unpopular then as it is now.

Will Trump find a way to convince Ivanka to rein in the “fashion alerts” and clothing line shills?