HILLARY Releases Nasty White Supremacist Ad Against Trump, Forgets to Mention Her History With Them! [VIDEO]

I hate to say[1], “I told you so…”, but… I did. Hillary Clinton has now come out with an ad highlighting the racism of the Alt-Right and tying it to Donald Trump. She’s not wrong here, although her reasoning is specious since she too has taken $20,000 from the Ku Klux Klan.

Frankly, I think both of them are racists and Trump has a eugenics twist to his thought process. He constantly refers to good genes etc. and the so-called leader of the Alt-Right has called for gentle ethnic cleansing. There are a lot of white nationalists tied to the Trump campaign. That doesn’t make everyone there racist, but it seems a number of them are high up in his ranks.

As far as Hillary goes, she’s just as racist if not more so with her aggressive support of Black Lives Matter. So, both have major racism issues and are pointing the finger at each other. 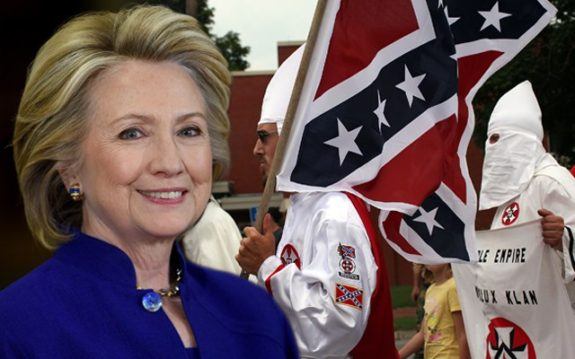 From The Washington Times[3]:

Hillary Clinton’s presidential campaign has received more than $20,000 in donations contributed by members of the Ku Klux Klan, a prominent member of the hate group said Monday.

“For the KKK, Clinton is our choice,” said Will Quigg, California Grand Dragon for the Loyal White Knights, Vocativ reported.

Mr. Quigg, the leader of the Klan’s California chapter, announced last month that he had abandoned supporting Republican presidential front-runner Donald Trump in lieu of backing his likely Democratic opponent. The Klansman claims that members have raised more than $20,000 for Mrs. Clinton and have donated it anonymously to her campaign.

“She is friends with the Klan,” Mr. Quigg told Vocativ. “A lot of people don’t realize that.”

Trump tried to head off Clinton’s ad by labeling her a bigot. It backfired and now they are screaming past each other.

The Alt-Right is shaping up to turn fascist. Trump left himself open to an attack by Clinton by not distancing himself from the racist elements of the movement. Instead he embraced them.

Clinton says she has rejected the KKK and their donations. I don’t know why she bothers… she has taken millions from our enemies who want to kill all Americans… as abhorrent as they are, the KKK is the least of her sins right now.

This is the worst election in my lifetime with the two worst candidates I have ever seen. As I said before, pick your poison and buckle up. Either way Russia wins and war is coming.

There's a reason the most hateful fringe of the right wing is supporting Donald Trump.https://t.co/AqB3DM2m0N[4]