Sarah Huckabee Sanders[1] read a touching letter from a nine year-old boy to President Trump yesterday during her press briefing. I’m sure liberals were livid over it. This is part of Sarah’s plan to read letters from the “forgotten men, women and children” that Trump says he’s fighting for every day. The little boy’s name is Dylan Harbin. It was adorable. He said his nickname was ‘pickle’ and that Trump was his favorite President. He even had his birthday cake in the shape of Trump’s hat. The left will hate this because it humanizes the President. Everyone else will be touched by it.

He asked a number of questions in his letter and Sarah answered them. He wanted to know Trump’s age, which is 71. He wanted to know how big the White House is and how much money Trump has. The last one was a toughie for Sanders: “I’m not sure, but I know it’s a lot,” Sanders said. “‘I don’t know why people don’t like you,'” Sanders read. “Me either, Dylan,” she addressed Dylan before she even finished his letter. “‘You seem really nice. Can we be friends?’ I’m happy to say that I directly spoke to the president, Dylan, and he would be more than happy to be your friend.” Sarah said hello to Dylan from President Trump and invited him to visit the White House if he comes to DC. 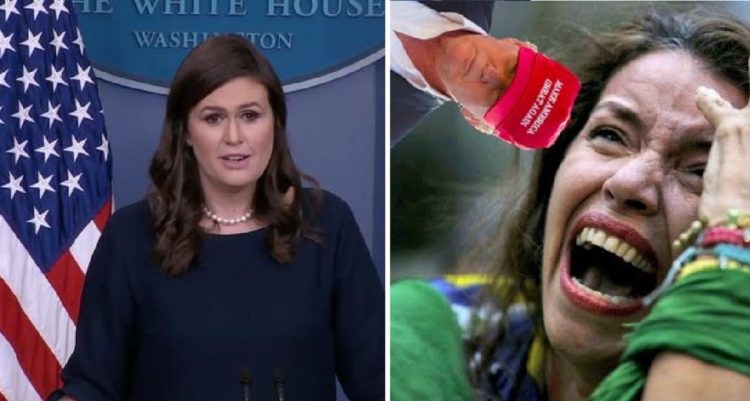 The new press secretary, who was appointed[3] to the role last Friday, told the White House press corp that she was going to try to read letters from the “forgotten men, women, and children” whom she said Trump was fighting for.

“To remind us a little bit more often about some of the forgotten men, women, and children that we’re here to serve and that the president is fighting for, we’re going to start the White House briefing every once in a while with a letter or an e-mail that we may receive from some of those individuals,” Sanders said.

The first such letter was from nine-year-old Dylan Harbin.

“‘My name is Dylan Harbin, but everybody calls me pickle,'” Sanders read. “‘I’m nine years old and you’re my favorite president. I like you so much that I had a birthday about you. My cake was the shape of your hat.'”

I especially liked the ‘can we be friends?’ part. I wish we could all be friends as well and just get done the things that are important to this country. Unfortunately, there are a lot of people out there filled with hate and resentment that don’t want to be friends. How do you explain that to a nine year-old? Liberals of course agreed with the ‘how much money do you have?’ part of this. That’s not important… it’s the friends part that means something. As usual, they miss the point, but little Dylan didn’t.

I like this new plan of Sarah’s. It’s grounding and brings into focus what really matters aside from all the politics that are drowning us these days. Like so many others out there, I’m part of the forgotten Americans that want our country back. Perhaps there is hope after all with the next generation like Dylan. And while many will think it naive to ever think we could all be friends, there’s at least one little boy out there who wants to be friends with the President. I think he has more sense than most adults these days.