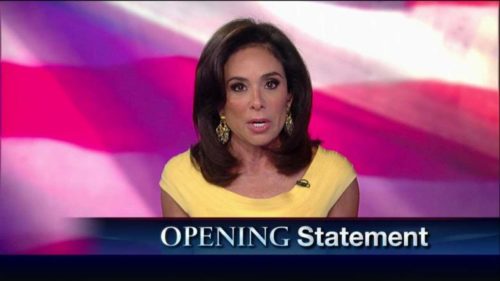 “I, for one, am sick and tired of “Russia, Russia, Russia!” That’s from Judge Jeanine Pirro[2] and she doesn’t take any nonsense from anyone. She certainly didn’t on Saturday night during her opening monologue. She took it to snowflakes, Russia, Obama, people who are obsessed by the nonexistent collusion of Trump and Russia, and anyone who can’t seem to focus on what’s important.

During her hard hitting monologue, she laid it out clearly. She was speaking directly to Democrats, Leftists and snowflakes who are all bunched up about Don Jr.’s meeting with a Russian lawyer during the campaign, in order to do opposition research. And she says in no uncertain terms that she, and they, would have done the same as Don Jr., when she says, “If the devil called me and said he wanted to set up a meeting to give me opposition research on my opponent I’d be on the first trolley to hell to get it. And any politician who tells you otherwise is a bald-faced liar.”

Pirro goes on to call out the real Russian sympathizer when she’s says, “It’s Barack Obama who’s pals with Putin. He watched like a wuss as Russia invaded and annexed Ukraine and the Crimean peninsula in 2014.” Indeed. Obama didn’t seem to give a rip about the Ukraine or Crimea. Only about his own power, prestige and position.

The Left always accuses others of being what they are, underhanded scheming liars who don’t care about anything but getting and keeping power. Well, Trump won. Get over it snowflakes. Time to go back to mom’s basement. Or, as Terrence Williams might say, they need to “go to bed.” Tough Judge Jeanine has it right.