Judge Jeanine Pirro is right on one thing…[1] there is nothing wrong with saying ‘America First’. Unless of course you remember, that was the saying of the American Nazis to keep us out of World War II. And I don’t hear Trump’s BFF Pirro going on about Trump’s minimum wage stance or his stances on: eminent domain, pathway to citizenship, Obamacare single payer, Common Core, massively raising taxes, transgender bathrooms, cuddling with Russia or a multitude of other flip flops. Pirro’s ex-husband was in a business relationship with Trump and they have known him for years. So, excuse me if her opinion carries very little weight with me on this. 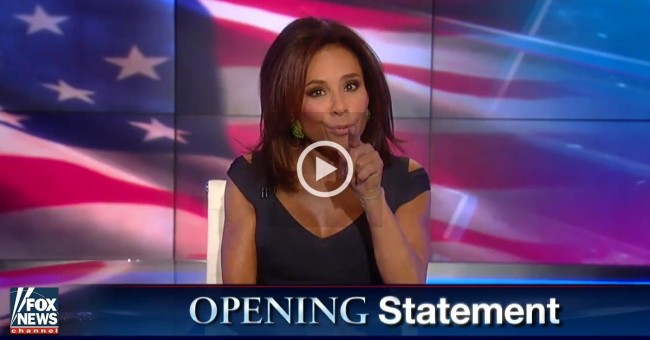 After presumptive GOP nominee Donald Trump summed up his foreign policy vision in late April with two words, “America First[3],” liberal media hacks responded by comparing him to the America First Committee that tried in the 1900s to stop the country from entering World War II.

Judge Jeanine Pirro vehemently disagreed with their bogus assessment, and she let them know exactly why this weekend.

“What’s wrong with ‘America First’?” she asked on Saturday’s edition of her Fox News[4] program. “To me, ‘America First’ is a breath of fresh air and exactly what this country needs. Don’t these people live here?”

There’s nothing wrong with being for America… but when you use uber nationalism and populism to push a political agenda, it is being used for evil. Period. “Do any of you like sending your children to war in foreign countries to impose our way of life on them, when they don’t want our way of life?” she continued. “When they resent it, and want to kill us for it?” I don’t know, do you want communism and the New Axis of Evil to run rampant in the world having their way? Do you think ISIS should be able to cut a swath across the planet and instill the Caliphate? No one wants their child to die, but we have a strong military for a reason. To beat back evil and our enemies. Pirro was all for fighting the enemy until she went in the tank for Trump. Now this. “We’re voting in record numbers for the man who is the biggest vote-getter in American primary history,” she said. “Since you screwed it up, can’t figure it out, and have made a laughing stock of this great nation, just shut up and go away. We’ll take it from here.” Yes, you will… you will elect Hillary in drag. A fascist tyrant who is a lying, two-faced dictator. You’ll justify it every step of the way, just as they did in Germany. You’ll screw it up even more and with finality.