I was afraid of this and I fervently hope that President Trump does not cave to the shrieks for gun control from the left. President Trump has indicated that he is willing to discuss gun laws after the Mandalay Massacre in Las Vegas that killed 59 and wounded 527. “Look, we have a tragedy … and we’ll be talking about gun laws as time goes on,” Trump said, after praising police officers for doing “an incredible job” in response to the shooting. Now, he may just be placating the left and I hope that is what this is, because one of Trump’s strongest stances is on gun rights which won him the support of the NRA and millions of Americans who cherish their Second Amendment rights.

The brutal truth of the matter is taking away the right to bear arms will not stop bad guys and crime. They will get guns and weapons to kill people on the black market or wherever they can be bought. What it will do is leave Americans at the mercy of thugs and living in fear. Ask Brits how well their gun ban has turned out for them or the Aussies about theirs. At this point, all Trump has said is they’ll be talking about the gun laws which can’t be avoided. And even if Trump caved and wanted to do something like that, Republicans would stop him. 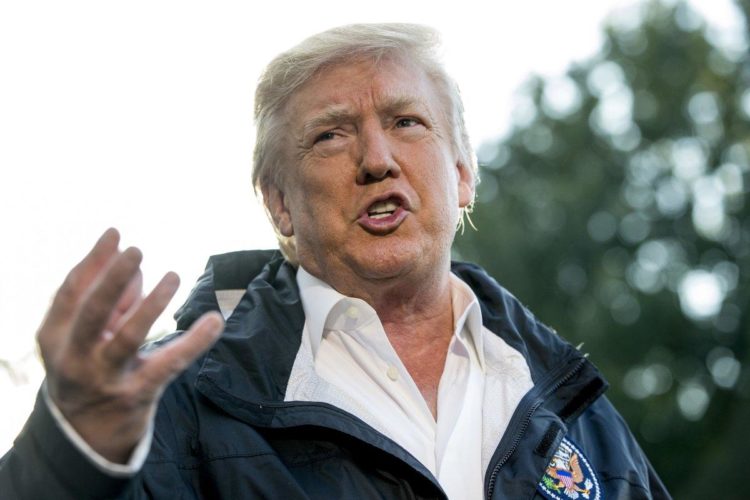 Trump did not indicate what aspects of gun legislation were open to discussion. He said this to a pack of reporters who were hounding him outside the White House as he was leaving with Melania for Puerto Rico. President Trump referred to the killer as a “sick man,” but did not discuss what might have motivated him. “He’s a sick man, a demented man. A lot of problems, I guess,” he said. “We are looking into him very, very seriously. But we’re dealing with a very, very sick individual.” I think we can all agree on that account… unless of course you are a leftist that is cheering the carnage.

When asked if he supported the pending legislation in Congress on gun suppressors, Trump replied, “We’ll talk about that later.” Trump and his sons have supported legalizing gun suppressors, so I don’t see this going anywhere, no matter what the left is demanding. And Hillary Clinton needs to shut her political yap over it. Trump pointed out that it was “a miracle” that the police department was able to stop the shooter quickly. “They’ve done an amazing job,” he said. They were tipped off by Chris Bethel, who is an Iraq War veteran from Fort Worth, Texas. He helped LVPD track down where the shots were coming from on the 32nd floor of the Mandalay Bay Hotel and Casino.

[email protected][2] on the shooter: "He was a sick man, a demented man… We're dealing with a very, very sick individual." pic.twitter.com/3A3rKTZCLr[3]

Let’s hope that President Trump puts this insanity to rest once and for all. I’m far more interested in why Paddock did what he did and who he’s connected with. But for now, the families of the victims need their space and our love and prayers… not leftist gun control.