This is disturbing. New York Attorney General Eric Schneiderman is assisting Mueller’s investigation into Russian interference in the 2016 presidential election. He’s now openly bragging about his successful resistance to the Trump administration in a Medium post. This guy places a central roll in Mueller’s investigation and he is massively biased against the President. He has branded himself as a public anti-Trump litigator during the President’s first year, in keeping with the history of hostility between the two men. How is the investigation into Trump supposed to be unbiased and fair when you have someone like this deeply entrenched in it? It can’t be.

The Medium post ran in tandem with a profile of Schneiderman in the New York Times. They touted that Schneiderman had filed 100 legal or administrative challenges to Trump’s administrative policies in his first year in office. These include lawsuits that went against the travel ban and the rescission of the Deferred Action for Childhood Arrivals (DACA), an Obama-era amnesty policy that grants temporary status to illegal immigrants who entered the country as children. 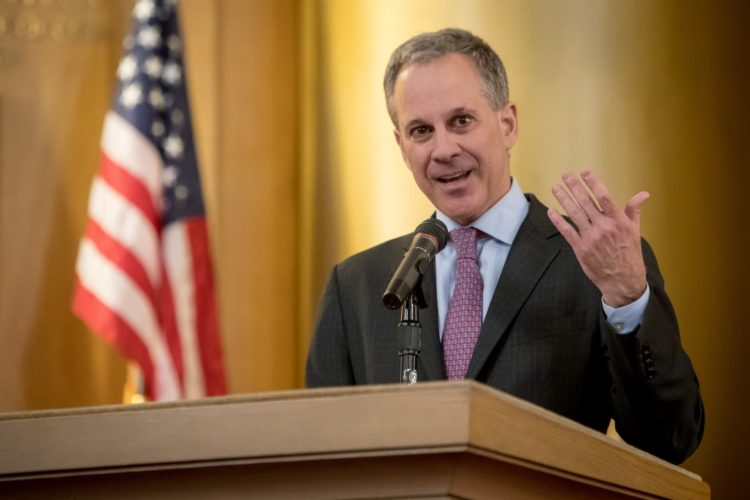 “We try and protect New Yorkers from those who would do them harm,” Schneiderman told the NYT. “The biggest threat to New Yorkers right now is the federal government, so we’re responding to it.” This guy should not be allowed to consult with Mueller. He has dozens of conflicts of interest here. If I didn’t think Mueller should go before (and I did), I know he needs to go now. Schneiderman is building a political profile to take Trump down. He says he has invested resources and personnel in anti-Trump litigation efforts, while coordinating with other Democrat state attorneys general to challenge the administration in court. It’s subversive.

His Twitter feed is a litany of attacks on President Trump. Mueller retained Schneiderman’s assistance in August in an effort to establish greater leverage against the President and his loyalists. Though the Constitution invests Trump with the power to pardon violations of federal crime, he cannot grant relief from state and local prosecution. This means that anyone that Trump pardons will be criminally prosecuted anyway. So much for Presidential prerogative.

It’s not clear how close Mueller and Schneiderman are cooperating with each other. Unnamed sources close to the investigation say they have shared evidence and discussed potential cases. Schneiderman was vague on his involvement in the NYT. He said he was “watching (the investigation) from the outside, like everybody else” and aides told the NYT that they halted their investigation of former Trump campaign chairman Paul Manafort’s finances out of deference to Mueller. Sure they did. I hear today that Mueller may be preparing to indict Manafort a second time.

Mueller cozying up to Schnedierman unfortunately makes total sense here. Many of Trump’s associates and business interests are based in New York City, where Schneiderman has power to bring cases. And Schneiderman was looking into Trump well before the 2016 election. The attorney general brought a $40 million civil case against the now-defunct Trump University in 2013 for fraud and illegal business practices. Trump settled the suit for $25 million during the transition. Needless to say Trump and Schneiderman don’t much care for each other.

Trump slammed this guy on Twitter during the Trump University civil case. In a string of October 2014 tweets, he accused the attorney general of wearing Revlon eyeliner and blowing cocaine at a Manhattan hole in the wall. Schneiderman denies both charges. I have no idea if there is any truth to that, but we are talking New York here. Just about anything goes there. I do know that Schneiderman and Mueller should not be cooperating with each other because of the massive bias there.