As much as the left would like to deny it, there were some really fantastic and inspiring moments[1] during President Donald Trump’s speech to Congress. 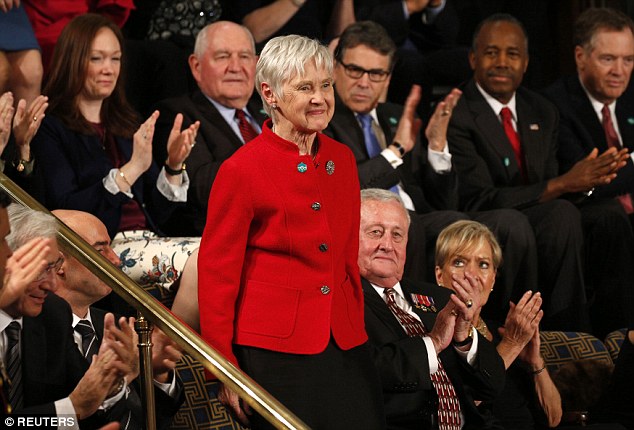 One was when he acknowledged the ultimate sacrifice taken by Navy SEAL William “Ryan” Owens. Owens was killed during a special operations military raid in Yemen against al-Qaeda. Trump brought attention to Owen’s widow, Carryn Owens, who was seated next to Ivanka Trump in the audience. It was at this time that Congress actually looked like they gave a damn and offered her a extended standing ovation as she looked skyward and sent her love to her beloved husband.

Not every Democrat though…Yeah, I’m looking at you Keith Ellison…You too Debbie.

There was also another special moment of exceptional recognition given to Maureen Scalia, the widow of the late and great, Justice Antonin Scalia.

The standing ovation was very pleasing to their son, Christopher, and you could tell this by how much Scalia’s colleagues appreciated him. They didn’t all agree with the man, but they did something extra special that never happens – they stood up and clapped.

In a touching acknowledgment to Maureen Scalia, Trump said, “her late, great husband, Antonin Scalia, will forever be a symbol of American justice.” Trump quickly went further to drive the point home that his pick to fill that empty seat, Judge Neil Gorsuch, was the right one to fill the seat of the conservative lion that was Scalia.

Justices never clap, let alone stand, during speeches to joint session, but they did for my mom. Beautiful. pic.twitter.com/JYDNzBtOdE[3]

Few people on the SCOTUS in recent memory have been as essential to the protection of the American Constitution than Justice Scalia himself. The right knows this. The left knows this.

All in all, the speech was a wonder and the right tone. Trump honored those individuals that dedicated their lives to the betterment of their fellow man and to their protection as well.