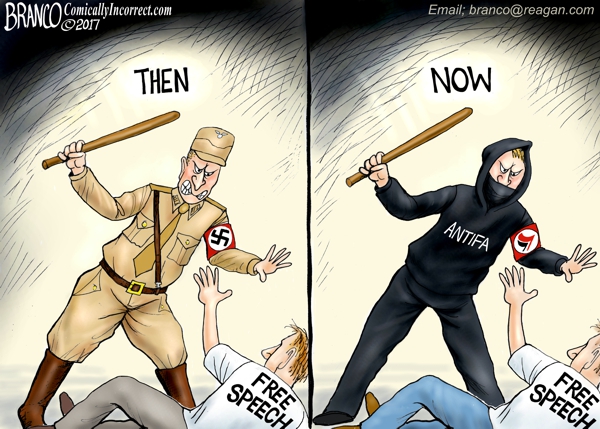 For the longest time, Conservatives have been hoping for elected Republicans that fight back against Democrats and the media. Trump is certainly not a Conservative, but, he was elected under the Republican tag, and, like him or loathe him, he fights back (full comments here[2])

(Fox News[3]) President Trump, responding to criticism that he failed to condemn white supremacist groups forcefully enough after the Charlottesville, Va., protest violence, on Tuesday called out “alt-left” protesters for their actions that same day, asking, “Do they have any semblance of guilt?”

The defiant statements came during a wide-ranging Q&A at Trump Tower in New York. And they instantly inflamed the controversy all over again, a day after he tried to put the issue to rest with a statement specifically condemning white supremacists.

“There’s blame on both sides,” Trump said Tuesday, echoing the language he had used Saturday when he faulted “many sides.”

Trump went on to criticize the “alt-left” for their role in stoking unrest over the weekend.

He’s exactly correct. Antifa and other leftist groups didn’t come to Charlottesville to counter-protest peaceably: you do not wear masks nor bring clubs, bats, and other dangerous weapons if you’re looking to be peaceful. We’ve seen the same thing at plenty of Antifa demonstrations and at ones where they show up. And they’re usually the ones that start the violence and mayhem. They are despicable people, who use anti-white and anti-cop language, who are just as bigoted and racist as the neo-Nazis, skinheads, and KKK.

None of that means that the KKK, neo-Nazis, nor skinheads are to be absolved. They are also despicable people. They do share an utter loathing of Jews with Antifa and Democrats, but, regardless, their racial beliefs are horrible. There’s more than plenty of blame to go around.

Of course, some Republicans, such as Marco Rubio and GOP Rep. Ileana Ros-Lehtinen, had hissy fits, as mentioned in the story. Democrats too had fits, but, those are expected. So many like Rubio, Ros-Lehtinen, Pelosi, the Politico, and so forth, think it’s about “redirecting blame.” No, it’s about assigning blame. If al Qaeda and ISIS get in a war of words, which then escalates to violence, who’s at fault? That’s right, both.

The NY Times editorial board likewise is incensed[4] that President Trump would note the violence from the “alt-left”. They call it a false equivalency. In other words, Trump is exactly correct. The Washington Post[5] states that there may be a time for this debate, but, it’s not now. Why not? We’ve seen the violence from Antifa since the election, and different violence from Leftists for a long time.

When is the best time to discuss left side violence? We’re happy to discuss the moral degradation of neo-Nazis, skinheads, and the KKK (say, when will Robert “KKK” Byrd’s name be removed from all those things in West Virginia?). Let talk about the Left’s moral degradation at the same time.