Kellyanne Conway bluntly stated[1] on ABC that President Trump will not be releasing his tax returns. I have a couple of things to say on that matter. I have written before that I would love to see what is in his taxes in regards to Russia. But in the end, it’s none of my business or anyone else’s what is in Trump’s tax returns. He is not legally required to show what is in them. I don’t know when it became a thing that all presidents had to release their taxes. I think it started in the 1970’s, but it is of no consequence.

First off, I don’t know about you, but I wouldn’t want my taxes out there for everyone to see. I don’t have anything to hide, I just like to keep my business private. I wonder if people understand that airing Trump’s taxes could hurt his business relationships? It really could, plus they are complicated. I would know… it’s one of the things I do. It would not stop the media and leftists from misinterpreting them and twisting them from now until eternity either. Why give your enemies more ammo? 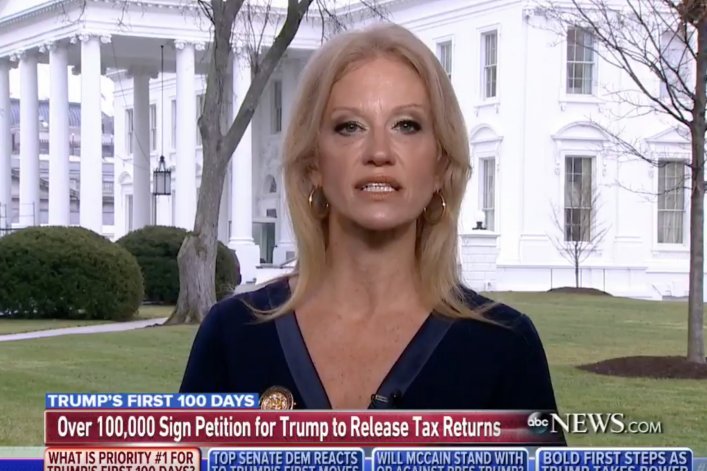 Kellyanne Conway said rather bluntly on ABC’s This Week today that President Trump‘s “not going to release his tax returns.” This marks a stark shift after numerous promises from Trump and his team that he would be happy to release them once an audit was completed.

Conway had this to say about that:

“The White House response is that he’s not going to release his tax returns. We litigated this all through the election. People didn’t care, they voted for him.”

Trump recently said that people don’t care about his tax returns, though a poll released a few days ago found that most Americans want him to release them[4].

And by the way, Clinton will scream that she released hers. It means next to nothing. A tax return can say just about anything you want it to say and cover up a mountain of misdeeds. It’s common as dirt, especially among the very wealthy. The media is screaming bloody murder over this, claiming that a poll shows the majority of Americans want to see Trump’s taxes. I don’t believe that for a second. I don’t think they care and Conway stated as much in this interview.

The biased media and the left are furious that they can’t get a grip on President Trump to bring him down. It would be entertaining if it wasn’t so maddening. Conway is correct when she says Americans are more worried about their own tax burdens and are demanding relief from Congress. The Dems will try and hold it up, but one way or another, taxes are now going to be reduced. Let the Marxists wail all they want. It’s part of fixing the mess Obama made. Watch the media twist this all out of proportion and take it for what it is… the indignation of communists.