Trump gave a powerful, brilliant speech[1] at the GOP National Convention. When speaking, he quoted a number of statistics relating to immigration and crime. It turns out the numbers he gave were fairly correct and when liberal fact-checkers went looking for lies, they didn’t find any. They weren’t happy about that by any means. As Breibart correctly noted, in practice, “fact-checking” makes debates more contentious by defending liberals and undermine conservatives on a partisan, not factual, basis — largely because the “fact-checking” is done by liberal publications. What is rare here is that they told the supposed truth about Trump’s numbers. 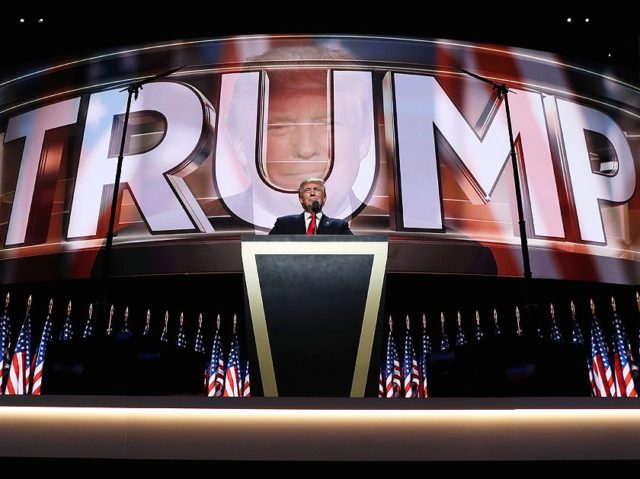 CLEVELAND, Ohio — The Los Angeles Times‘ Melanie Mason reports[3] that immigration statistics cited by Donald Trump during his acceptance speech at the Republican National Convention were “basically right,” even if immigration is “flat overall.”

Mason’s verification came on the heels of confirmation[4] by another Times reporter, Seema Mehta, that Trump’s crime numbers were “mostly accurate,” though Mehta went on to argue that “his conclusions are a stretch.”

The enterprise of “fact-checking,” a relatively recent phenomenon, attempts to inform readers and viewers about whether claims made by political candidates about the state of the world are actually true. In theory, fact-checking is meant to keep politicians honest, and guide public debate toward reasoned conclusions about policy, and prevent hyperbolic, divisive debates fueled by misinformation.

The fact-checker noted: “Here’s what Trump contended in his nomination speech: “The number of new illegal immigrant families who have crossed the border so far this year already exceeds the entire total from 2015.” Trump is essentially correct here. According to statistics from the U.S. Border Patrol, around 51,000 families — consisting of at least one child accompanied by at least one adult — have crossed the border since the beginning of the 2016 fiscal year, which started last October.” This same woman says that the number of people living here illegally has leveled off since 2007. Excuse me if I call bull crap on that, so I tend to not believe her on much of anything else either. Trump’s numbers were probably accurate. He would gain nothing by fudging them. What people should pay attention to is the character of his message… now that gives me pause.