I’ve heard that everything liberals don’t like is literally Hitler, but September 11th is a new one. Offensive, but I have to give them points for creativity.

But not many, because Trump’s election was decided by the people of America and nobody has died because of it.

A sports writer recently-fired from the New York Post says the paper let him go because of a Tweet in which he compared the Inauguration of President Donald Trump to the attacks of September 11 and the attack on Pearl Harbor.

Last week Barstool Sportsscreengrabbed a tweet[2] by former Post writer Bart Hubbuch, in which the journalist wrote the date of the Trump Inauguration, 1/20/17, alongside 9/11/01 and 12/7/41 in a since-deleted tweet. 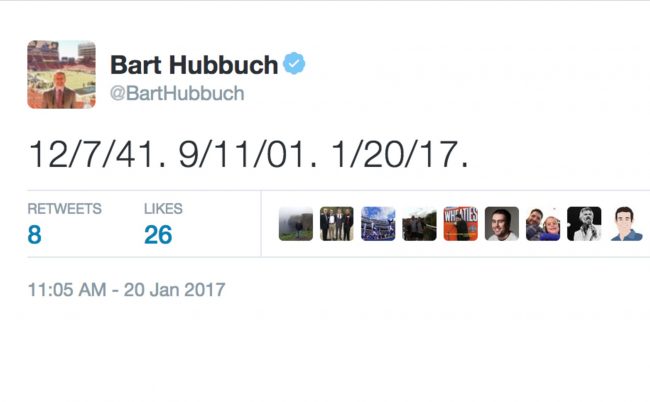 Hubbach then, in tweets posted by Awful Announcing which have also been deleted, issued an apology[4].

“My sincere apologies for comparing this day to 9/11,” Hubbuch wrote. “It was insensitive and wrong, and I shouldn’t have done it.”

But Hubbuch has apparently been let go from the paper, and he claims that his tweet was the reason why:

I can’t say I feel terrible about his being fired. In fact, I think I might enjoy a celebratory glass of wine.