You’ve got to be kidding me.[1] Seriously? President Trump took his first ride on Air Force One yesterday. What does the press and the left fixate on? Why, President Trump broke decades of tradition and did not turn around and wave at them as he boarded. For that, they labeled him a disgrace. Frankly, he probably did it on purpose to show his disdain for them and I don’t blame him in the least. How petty can you get.

President Trump was preoccupied with the people’s business at hand and going to the Republican policy retreat in Philadelphia. Trump took Marine One, the presidential helicopter, from the White House to Joint Base Andrews in Maryland. It was also Trump’s first ride on Marine One. He then boarded Air Force One as cameras waited to record another first for his administration. But Trump is not concerned with placating the press and posing for them. They seemed to get very perturbed that he did not follow protocol. 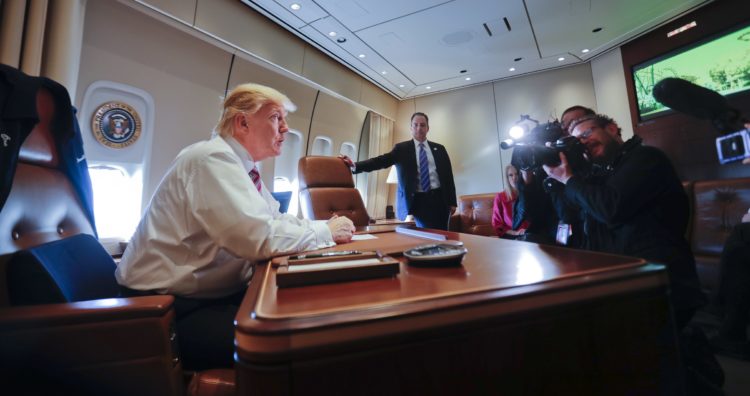 However, when Trump walked up the steps and got on the plane he didn’t turn around and wave to the press and the people below.

That’s something presidents have always done in the past.

For some odd reason, liberals were annoyed about that. 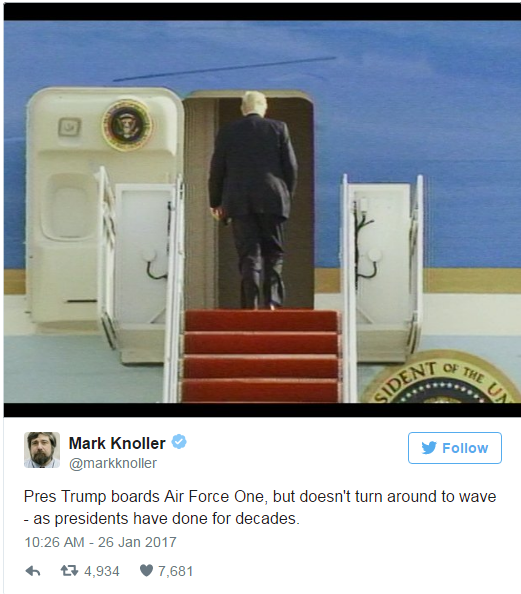 Are you serious guys?

You don’t get it both ways. Liberals in the media lied for a year while colluding with Trump’s opponent to trip him up at every turn.

Now you are angry he didn’t wave at you?

How out of touch can the press possibly get?

Things are changing between the White House and the media.

Adapt or get out of the way.

You know you’ve got problems when you are upset at something this petty.

Frankly, I don’t give a rat’s behind if President Trump waves at people and massages the press. I’m good with him being all business and doing what he promised to do. Trump is like no other president we’ve ever had and has very little tolerance for the bull crap that most other presidents engaged in. He did wave and smile when he arrived in Philadelphia. But the media was quick to jump on him and say how awful he was because he didn’t follow their rules. Oh, just shut up already and go away.

His meeting with Republican members of the House and Senate is his first as president and comes as the White House and Capitol Hill are defining their working relationship. Republicans are excited to meet with Trump to discuss the wall, economics, jobs, taxes and a whole array of issues President Trump is tackling. Let the press whine over decorum while a real leader works for America. It’s refreshing.