London’s Mayor Sadiq Khan[1] is at it again over President Trump. He’s calling once again for Trump’s state visit to be cancelled. Britain has seen three terrorist attacks in the last three months. Two terrorist attacks in London have occurred under Khan since he was elected in May of 2016. Khan has his knickers in a twist over Trump chewing him out for telling Londoners not to be ‘alarmed’ at a greater police presence in the streets there after yet another murderous terrorist attack involving the London Bridge area.

Khan made his comments on television citing President Trump’s call for a travel ban from six Muslim terrorist hotbed countries and saying it “go[es] against everything we stand for.” So, you stand for Islamic extremism? Thought so. Thanks for clarifying. Brits are dying in the streets of London and this asshat has the supreme nerve to want to ban President Trump from Britain because he’s calling for extreme vetting of refugees, secure borders and an end to terrorism. Hello London! You need a new mayor… you made a grave and deadly mistake electing this Islamist spokeshole. 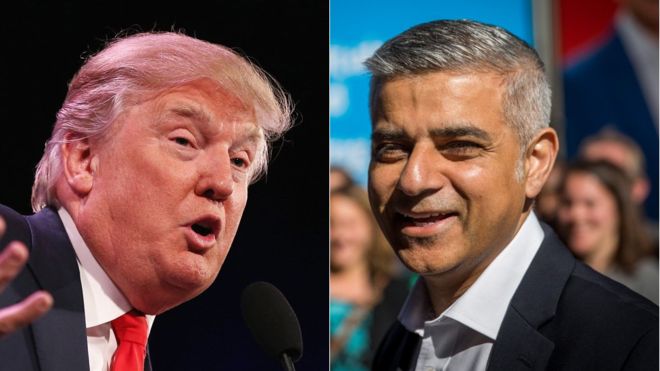 London Mayor Sadiq Khan — who has seen two terror attacks in the city since he took office in May 2016 — has called for the state visit of U.S. President Donald Trump to be cancelled after the president slammed Khan for telling Londoners there is “no reason to be alarmed” following Saturday’s terror attack.

Mr. Khan made the comments on Channel 4 News, saying the president’s policies — his proposed temporary travel ban[3] on immigration from six Middle Eastern nations on grounds of securing the safety of American citizens — “go[es] against everything we stand for”.

“I don’t think we should roll out the red carpet to the president of the USA in the circumstances where his policies go against everything we stand for,” he said.

“When you have a special relationship it is no different from when you have got a close mate. You stand with them in times of adversity but you call them out when they are wrong. There are many things about which Donald Trump is wrong.”

This is not the first time the London mayor has called for the offer of a state visit to be rescinded.

Britain is our closest ally. That the mayor of their largest city would be so disrespectful to our President is incredibly rude and quite illuminating. London’s Muslim mayor has done this before. In January, Mayor Khan called on the government to rescind its offer of a full state visit to President Trump while the President stood by his travel ban policy – despite Khan hosting a party with dignitaries from 11 nations that ban entry of Israeli passport holders to their countries. So, you see, Kahn is not only a terrorist sympathizer, he’s an anti-Semite.

Theresa May has called President Trump wrong in his criticism of Khan. But says his visit will not be cancelled. Excuse me if I smirk at May. This is a woman who got rid of 20,000 police officers in London because they weren’t ‘needed’. Her solution to the recent terrorist attacks by the way is to censor the Internet… globally. Britain has real problems. May is with the Conservative Party, but should resign or be removed. Corbyn may very well beat her now… but he’s with the commie Labour Party. Either way, the Brits are screwed over this. I think Nigel Farage is right… Brits aren’t going to put up with this insanity much longer. That certainly includes Khan’s Islamist-loving ways.

We need to be smart, vigilant and tough. We need the courts to give us back our rights. We need the Travel Ban as an extra level of safety!

That's right, we need a TRAVEL BAN for certain DANGEROUS countries, not some politically correct term that won't help us protect our people!