MSNBC went to North Carolina[1] to speak with people about President Trump. They voted for him to become President and according to this, they’d do it again. Many think the Russian investigation is not important. That Trump has more pressing matters to attend to. MSNBC seemed shocked they would feel that way. There’s no way this investigation comes even close to the Watergate scandal and Americans are just not buying that leftist bull crap. And you don’t have to be a Trump acolyte to feel that way. You just have to be unbiased and have a couple of functioning brain cells. Americans want Trump given a chance to do his job and that includes many Democrats.

I’m not a rah, rah person for Trump. I do everything I can to stand in the middle and praise the President when he does something good and call him on things that he does that are bad. I’m in this for the truth no matter where it falls. He has done nothing unconstitutional or illegal that I can see. There is no obstruction of justice and nothing impeachment worthy on the table. But I will say this… I want the Russian investigation. I want it done not just on Trump, but on Obama and Hillary and anyone else involved. I want it laid out just how much the Russians are messing in our business. Let’s have transparency and settle this whole thing once and for all. 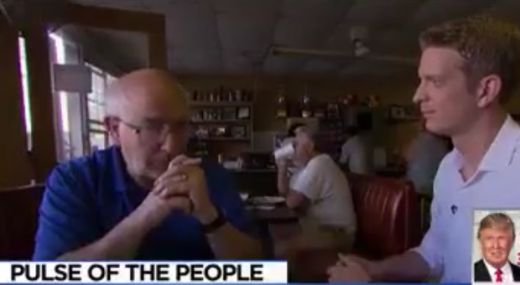 Voters in North Carolina urged Democrats to give President Donald Trump a chance to enact his agenda Thursday, asserting that there were more important things to worry about than the investigation into his campaign’s ties to the Russian leadership.

“I think this is just part of the witch hunt,” Trump supporter Tim Steele told MSNBC in a segment filmed from North Carolina. “In fact, I saw it came across on the internet that Trump has said this is the biggest witch hunt in history. You know, and I just I don’t think there is anything to the Russian thing.”

Former FBI Director Robert Mueller was named as the special prosecutor into ties that members of Trump’s campaign allegedly had with members of the Russian government. Several members of Congress, including Sen. John McCain, compared the ongoing scandal to President Nixon’s Watergate scandal. But everyday voters aren’t convinced that the investigation is worthwhile. There are other parts of Trump’s agenda that are good, and they deserve a chance outside of the ongoing controversy.

“I just think Trump has to learn,” North Carolina voter Don Schrum told MSNBC about the president’s actions. “Trump’s used to CEO, owner, the board of directors, whatever, trump is used to getting his way when he says it. Washington doesn’t work like that.” And that is true. I like Trump’s independent streak which he has cultivated as a brawler in business. However, he needs to learn that this is a different kind of game. You have to watch what you say very carefully and you cannot trust anyone.

“That’s the bottom line. folks don’t see the Russia investigation or Bob Mueller news as directly impacting their life,” MSNBC Reporter Garrett Haake said about the voters. Well, it does. Russia has impacted all our lives for decades… they are our enemy and a menace and all this Russia-love is very, very dangerous. People right now care more about jobs and securing our borders. They want America to be great again. I just hope that America doesn’t realize in the end that when you deal with the likes of Russia, China, Iran, North Korea and others, you will get burned.