And the gloves come off…[1] I think President Trump has had just about enough of Joe Scarborough and Mika Brzezinski trash talking him on Morning Joe and making anti-Trump rock videos. He ripped them a new one on Twitter this morning and did not hold back. He called the show poorly rated and that he didn’t watch it. He called Mika ‘low I.Q. Crazy Mika’ and claimed she was bleeding badly from a face-lift when she was at Mar-a-Lago on New Year’s Eve. Mika then slashed back at Trump about his ‘little hands’. Trump called her fiance ‘Psycho Joe’. Ready to rumble guys?

Of course Scarborough and CNN’s Jake Tapper alluded to Trump being a bully here… but why shouldn’t he defend himself from these ongoing slanderous attacks by these two leftist love birds? They tried to pull Melania into this over cyber-bullying. Just shaking my head. NBC’s Mark Kornblau, head of PR for the networks, said in an unofficial statement on Twitter, “Never imagined a day when I would think to myself, ‘it is beneath my dignity to respond to the President of the United States.'” But it’s not beneath your dignity to spout lies about the President of the United States? Noted. 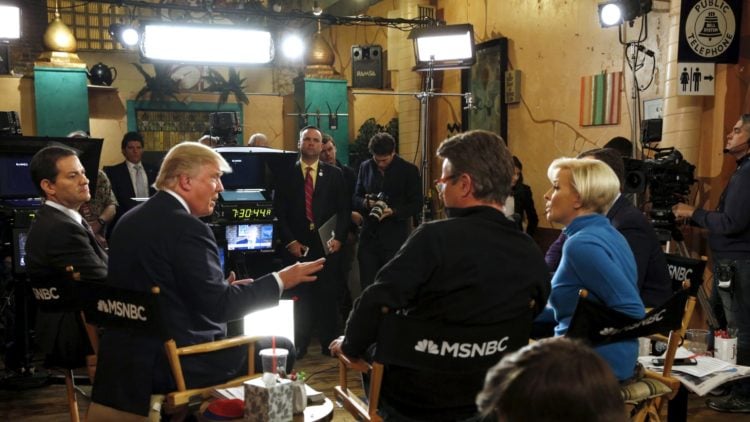 Trump sent the tweets minutes before the end of the engaged duo’s MSNBC program, cutting down on their ability to respond immediately on air.

‘I heard poorly rated @Morning_Joe speaks badly of me (don’t watch anymore). Then how come low I.Q. Crazy Mika, along with Psycho Joe, came…to Mar-a-Lago 3 nights in a row around New Year’s Eve, and insisted on joining me. She was bleeding badly from a face-lift. I said no!’

Brzezinski hit back at Trump 20 minutes later on the social media platform, sharing a ‘little hands’ graphic in a throwback to Trump’s campaign argument with Sen. Marco Rubio that morphed into a debate about the size of their appendages.

Scarborough let CNN’s Jake Tapper do the talking for him. ‘This reminds me: how is @FLOTUS’s campaign against cyber-bullying going?’ the CNN host said in a message that Scarborough retweeted.

And the whinging continues… an official statement from MSNBC that was posted on Twitter by CNN’s Brian Stelter said: “It’s a sad day for America when the president spends his time bullying, lying and spewing petty personal attacks instead of doing his job.” Then why the hell don’t you do your jobs and actually report the news and quit attacking the President at every turn? Hmmm?

In the opening of Thursday’s show, Scarborough called out Trump for being a fake populist and pointed a finger at Senate Republicans saying their healthcare bill gave tax cuts to their donors at the expense of robbing the poor. What bull crap. Scarborough is a leftist who pretends to be a Republican. No wonder he fell in love with a commie like Brzezinski. Mika chimed in and said the President, ‘a proven liar,’ made House Republicans ‘look like fools’, by making them celebrate their bill’s passage in a Rose Garden ceremony last month. No one is making anyone do anything and I didn’t hear this crap when Obama was standing in front of Greek columns and was being immortalized as some kind of messiah. What hypocrisy.

How soon everyone forgets that Joe and Mika partied with Trump at Mar-a-Lago and when they were cornered on it were very testy. “Partied? You’re very good at pushing fake news. You should write for CNN. Apparently making up facts is fine if you’re writing about us,” Scarborough told a CBS reporter who’d covered Trump on the trail and was transitioning into a culture writer role at the New York Times. That honeymoon is over and now they want Trump’s head.

This is what passes for news on Morning Joe:

‘At a time when the rich are getting richer and the poor are getting poorer at a faster rate than ever before in our nation’s history this is the point where Republicans say, “Hey, we’ve got a great idea, we’re going to cut a trillion dollars of benefits from the poorest Americans and we’re going to give it to the wealthiest Americans,”‘ Scarborough said.

Brzezinski piled on: ‘And this was the president who was going to change Washington.’

‘What a populist,’ Scarborough added.

He then looked directly into the camera.

‘Way to stand up to Goldman Sachs, Mr. President, we’re really proud of you, buddy,’ he said.

‘Why don’t you get another Time magazine cover,’ Brzezinski said, referring to the Washington Post story that said fake Trump Time covers were hung at several of the president’s resorts.

I rest my case. Asshats.

…to Mar-a-Lago 3 nights in a row around New Year's Eve, and insisted on joining me. She was bleeding badly from a face-lift. I said no!