Netanyahu Is All In For Trump’s Wall, Calling It A ‘Great Idea’ 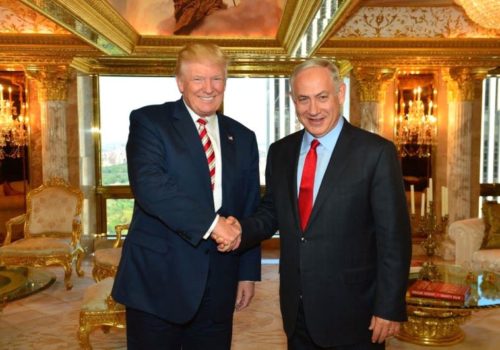 This past Wednesday, President Trump signed an Executive Order for the construction of the wall[2] along the Untied States southern border. This campaign promise was likely an integral reason for his election. Many Americans have grown weary of bad immigration policy, unvetted refugees and those with evil intentions being able to get into our country so easily. All of that is about to change as President Trump has begun to put in place provisions to scrutinize immigrants and refugees more closely and to stop the flood of illegal immigrants surging through our porous border with Mexico.

But Americans are not the only ones in solidarity with Trump on the wall. Israeli Prime Minister Benjamin Netanyahu is also in agreement with it. Netanyahu tweeted his praise for the move.

It’s time to put America first. Will there be growing pains and kinks to work out with the new more stringent rules? Yes. Will some folks be turned away? Yes. Those who cannot meet the criteria for entrance simply will not be admitted. And this is doubly important in the case of those attempting to immigrate here from nations with large terrorism problems. It’s time to protect US citizens. And President Trump appears to be following up on his promise to do so. It’s about time we had a President whose main concern is the safety of US citizens. Here’s to brighter and safer days ahead.