The New York Post[1] has come out and wholeheartedly endorsed Donald Trump for the Republican nomination. They did this just before New York’s primary to give their home boy a boost. Not bad for a publication who in the past compared Trump to The Joker and lambasted him regularly. Looks like they are converts now. They think he’s our best hope. Then we are truly screwed. On a more conservative note, The New York Sun endorsed Ted Cruz, but you won’t hear of that in the media. Where The Post says Trump is a true New Yorker, The Sun[2] has this to say about Cruz: “In the Republican presidential primary in New York, the Sun urges a vote for Senator Ted Cruz. It hasn’t been our normal practice to endorse in the primaries, but this year the vote, set for Tuesday, will take on outsized importance as we career toward a contested convention. The junior senator from Texas has emerged from a crowded field by dint of his fidelity to principles — limited, constitutional government, sound money, free markets, and a strong foreign policy — that couldn’t be at higher premium. They are the true New York Values.” New Yorkers need to ask themselves if their values are those of Progressives or constitutional conservatives. America’s dying to know. 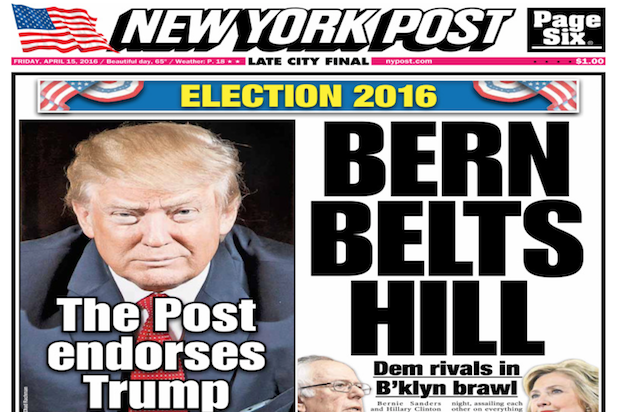 The Post editors made the announcement[4] Thursday in anticipation of Tuesday’s New York primary, calling Trump “a New Yorker, born and bred.” 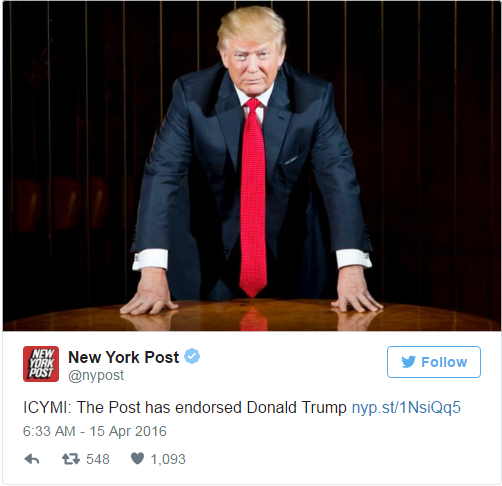 “Trump has electrified the public, drawing millions of new voters to the polls and inspiring people who’d given up on ever again having a candidate who’d fight for them,” the Post said.

Calling the GOP front-runner a “do-er,” the Post described Trump’s business successes and his ability to “rip through government red tape and get things done.”

“These last 10 months, he’s ripped through a different morass — the nation’s stale, insider-driven politics,” it continued.

To be fair, The New York Post did point out some of the Trumpster’s shortcomings: “Donald Trump is a rookie candidate — a potential superstar of vast promise, but making rookie mistakes,” the Post said, citing examples of policies “that seem made on the fly.” Criticism of Trump’s language was addressed as well. That’s putting it mildly… how about his support of Obamacare, abortions and his new found fondness for HB1 Visas? How about his lies and disdain for women? How about eminent domain or forcing others to comply with his will? “But what else to expect from someone who’s never been a professional politician and reflects common-man passions?” the Post said. “Indeed, his political incorrectness is one of his great attractions — it proves he’s not one of ‘them.’” Does it? All the world’s a stage and Trump is but an actor. That’s a lame reason to endorse a candidate… really lame. “Trump is now an imperfect messenger carrying a vital message,” the Post concluded. “But he reflects the best of ‘New York values’ — and offers the best hope for all Americans who rightly feel betrayed by the political class.” If that’s the best you’ve got, no thanks. 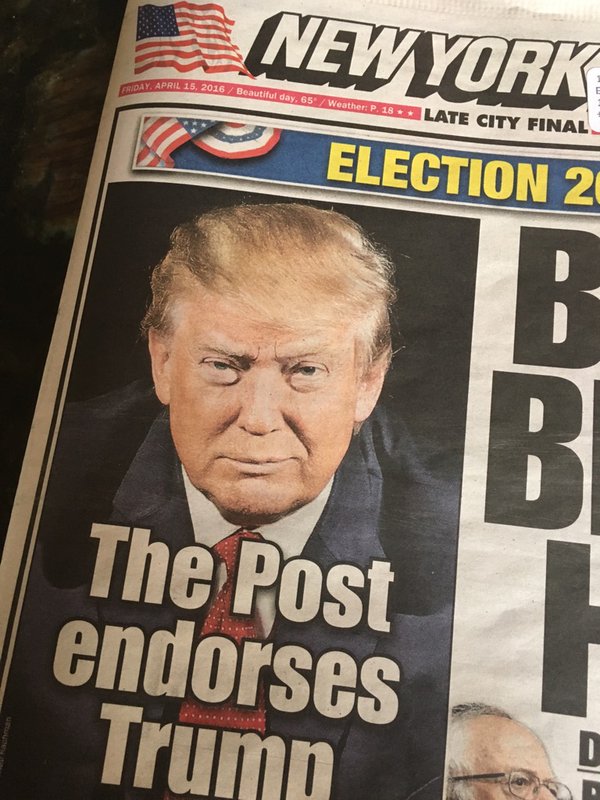