Donald Trump decided to remove the United States from the Paris climate agreement, to the approval of American conservatives. But liberals were furious — along with numerous world leaders. It seems that major foreign leaders have united in their disapproval of Trump’s decision, but no one got more upset than a German newspaper which had a rather inflammatory headline[1]: 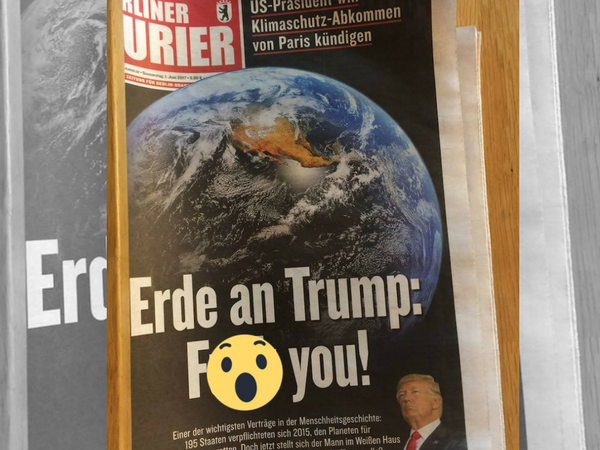 The Berliner Kurier reacted harshly to Trump’s decision, running a front-page story with the headline, “Earth to Trump — f*** you!”, after Trump had already received criticism and anger from German Chancellor Angela Merkel. “We in Germany, in Europe and the world will band together to take more decisive action than ever to confront and successfully surmount major challenges to humanity such as climate change,” Merkel vowed in response.

She also made a statement to the German parliament, saying, “The decision of the US President to withdraw from the Paris Climate Agreement is very regrettable, and I’m expressing myself in a very reserved way when I say that. To everyone for whom the future of our planet is important, I say let’s continue going down this path so we’re successful for our Mother Earth.”

“You shouldn’t make a noise about this, but should create the conditions for joint work,” he said, pointing out that Trump wanted to renegotiate a new deal. “If such a major emitter as the US is not going to cooperate entirely then it won’t be possible to agree any deal in this area.” He then added that “in my view it was possible (for the US) not to leave the Paris agreement because it is a framework deal, and it was possible to change the US obligations inside the framework of these agreements.”

China, meanwhile, promised to uphold their end of the agreement, despite their status as the world’s biggest polluter. Other world leaders likewise criticized Trump, and so far, no one has come forward to accept Trump’s offer to renegotiate a new deal.

Do you support Trump’s decision to leave the Paris climate agreement?