Nikki Haley Pulls NO PUNCHES On Her First Day At United Nations – Warning Both Allies And Enemies! [VIDEO]

Looks like Nikki Haley[1] has grown a set or had them all along. Refreshing. She told the press in no uncertain terms how we would approach our allies and how we would deal with our enemies at the United Nations. Haley said this is a time of strength and the US will note who does not have our back and we will respond accordingly. We will take care of our allies, but they must reciprocate. This is a new order… one where America is first. America is now leading the pack, not following behind as she did with a limp leader like Barack Obama. Me likey.

Haley did not take questions from the press at the United Nations after her short, forceful statement. I think there is an administration wide policy of disdain for the media these days and with good reason. I would wager there are a bunch of Islamists, dictators and Marxists who just had a cold finger of fear go down their spines. Good. We shouldn’t be in the UN at all, but if we are going to be there… roar and show them who the real alpha is. 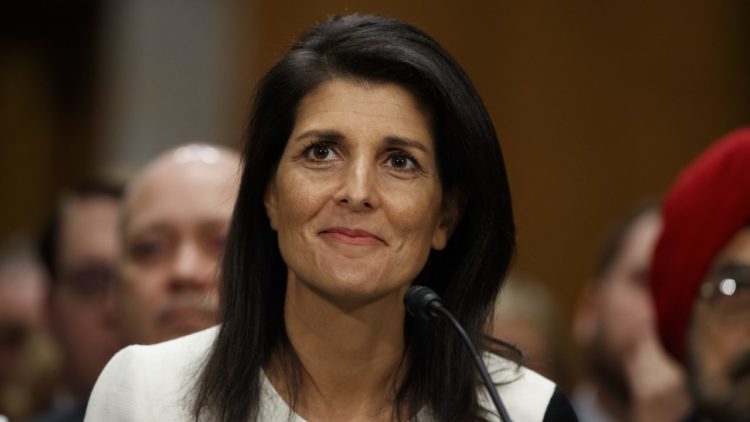 Former South Carolina Governor Nikki Haley made a startling statement to the press about the country’s friends and foes on her first day at the United Nations as the U.S. ambassador Friday.

She made a short statement to the press at the United Nations, and took no questions afterward.

“I will tell you that we have hit the ground running,” Haley began. “We talked to the staff yesterday and you are going to see a change in the way we do business. It’s no longer about working harder, it’s about working smarter.”

And we have a fantastic team at the U.S.-U.N. that is ready to prove that. Our goal with the administration is to show value at the U.N., and the way we’ll show value is to show our strength, show our voice, have the backs of our allies, and make sure that our allies have our back as well.

For those who don’t have our back, we’re taking names. We will make points to respond to that accordingly.

Haley finished with, “this is a time of fresh eyes, new strength, new vision and a great day.” Yes, it is… it is America’s time. President Trump has almost no use for the United Nations, but Haley seems to have convinced him of the necessity of the global body. Pity. She is increasing our influence at the UN in order to advocate for US interests more. This is in stark contrast to Obama’s deference to the United Nations… he released $500 million to them during his exit from the Oval Office. Disgraceful and bordering on treasonous.

Haley was a critic of Trump’s during the primaries, but has since come to support him while nailing the Republican Party. I am not a tremendous fan of Haley’s. But she is an advocate for Israel and showed real spunk at her first briefing at the United Nations. Let’s see if her bark has some bite.